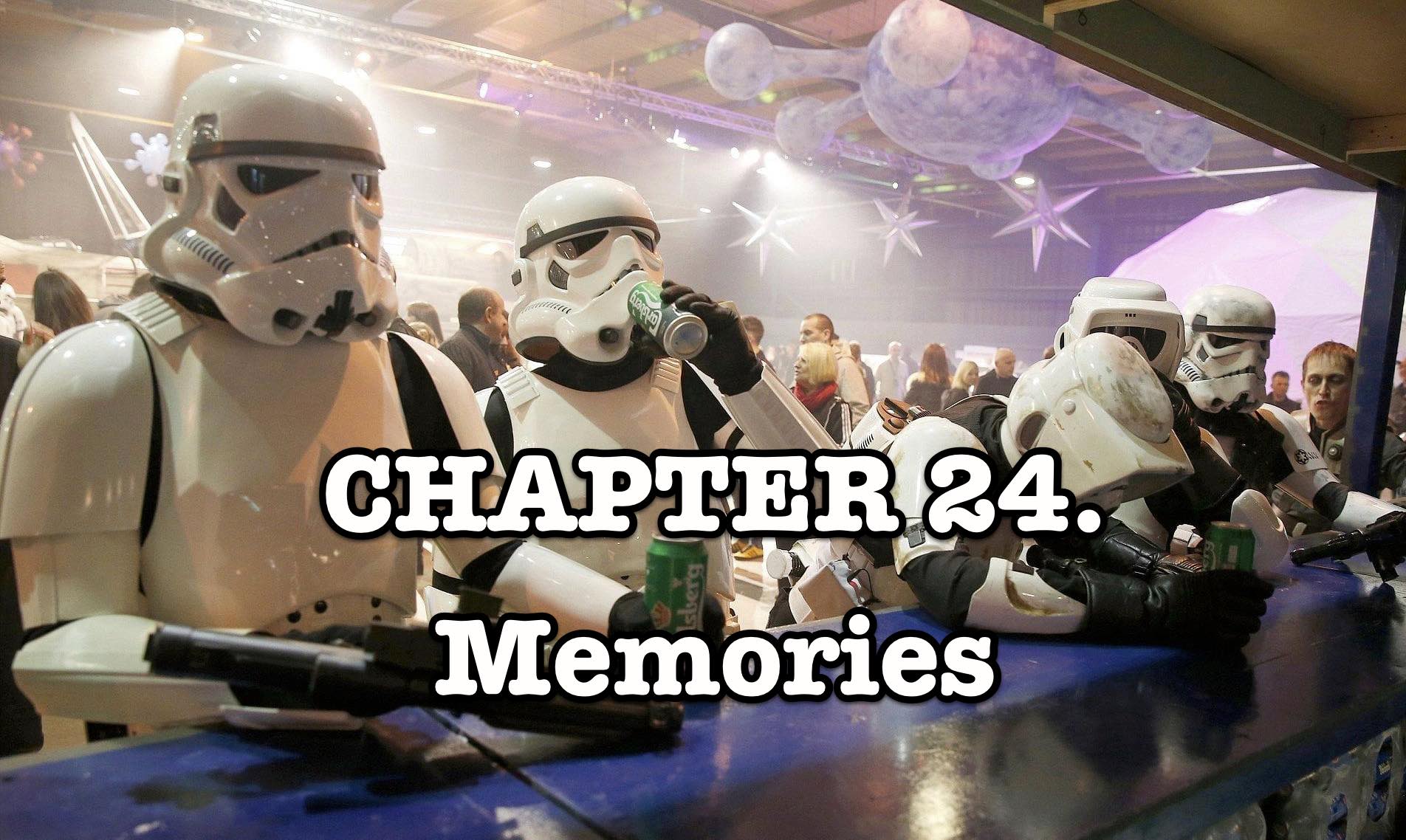 -Memories-
“Back on Kamino,… they never prepared us for what happens for the mental obstacles we had to cross.

I was on some god forbidden sand covered planet that was just as hot as any other desert planet. I couldn’t quite orient myself- my vision going in and out of focus.

I removed my helmet and looked across what seemed to be a hell-scape. Everyone was… moving in slow motion?

I saw blaster bolts fly by, colliding into New Republic soldiers and Stormtroopers alike- but our armor was… different somehow- but we were still losing…

I turned around to hear a lightsaber ignite, and saw the Jedi known as Luke Skywalker. He… he didn’t see me somehow. He extended his hand above my head. When I turned to see what he was gesturing too- I saw the ship I was assigned to.

Falling out of the sky.

I jolted awake, sweat beading down my face. I at first was confused- but then realized I was in my bunk. I looked to my left to find Teeko- still sleeping.

I rose from my bunk and took a shower- rinsing the sweat off of my body.
I exited the bathroom, and entered my armory which held an electronic mirror and my armor on display, and began to put on the black body glove that was worn under our armor. Before I could finish putting it on however, I saw Teeko observing me- notably looking at all the scars I had acquired over my career of combat.

She smirked, getting up herself and putting on her own equipment. She remarked that despite being an old man, I wasn’t incompetent in bed.
I took it as a compliment since it was my first time, but she didn’t need to know that.

She smiled as she made her way to the exit of my room, stating that she would see me later.

I wondered if I really would.

I made my way down to the mess hall, to grab a drink- the only pass-time for Imperials when not fighting, was getting piss drunk. And that was the plan.

I made it to the bar, and began throwing back drinks. It seemed the more I drank, the more I forgot the faces of my brothers who had fallen under my command, they still haunt me to this day. Their faces, their screams… burned into my memory.

And hopefully washed away by alcohol.

With only roughly about 50 original clones still alive in the Imperial forces, we were becoming a rarity. I bet the Empire wishes they would have kept Kamino running now.

Teeko found me at the bar, and jokingly elbowed my pauldron to get my attention. She bought herself a drink, and struck up a conversation with me. She asked me about the Clone Wars, which.. I surprisingly opened up to her about. She listened, actually listened. She listened to me telling her the living hell that was Geonosis, Order 66 on Kashyyyk, the raid on Naboo… her eyes were wide the entire time.

After I told her my story, she grew quiet for a moment. I was worried that I had frightened her, possibly dumping too much on her at once.

But then she looked me in the eyes, and told me
‘Soldiers don’t fight for a political cause. They fight because they love whats behind them.’

That took me by surprise, she wasn’t wrong. I loved all of my brothers and would gladly lay down my life for their safety, as I was trained.

But I thought back to Tattooine, when I was covering our forces retreat with the heavy repeating blaster. I thought that would be my last moment on the battlefield.

But she intervened… why?

I didn’t have time to finish that thought, as an alarm sounded off- alerting all troops to get to their battle stations.

For we had arrived at our target location.”