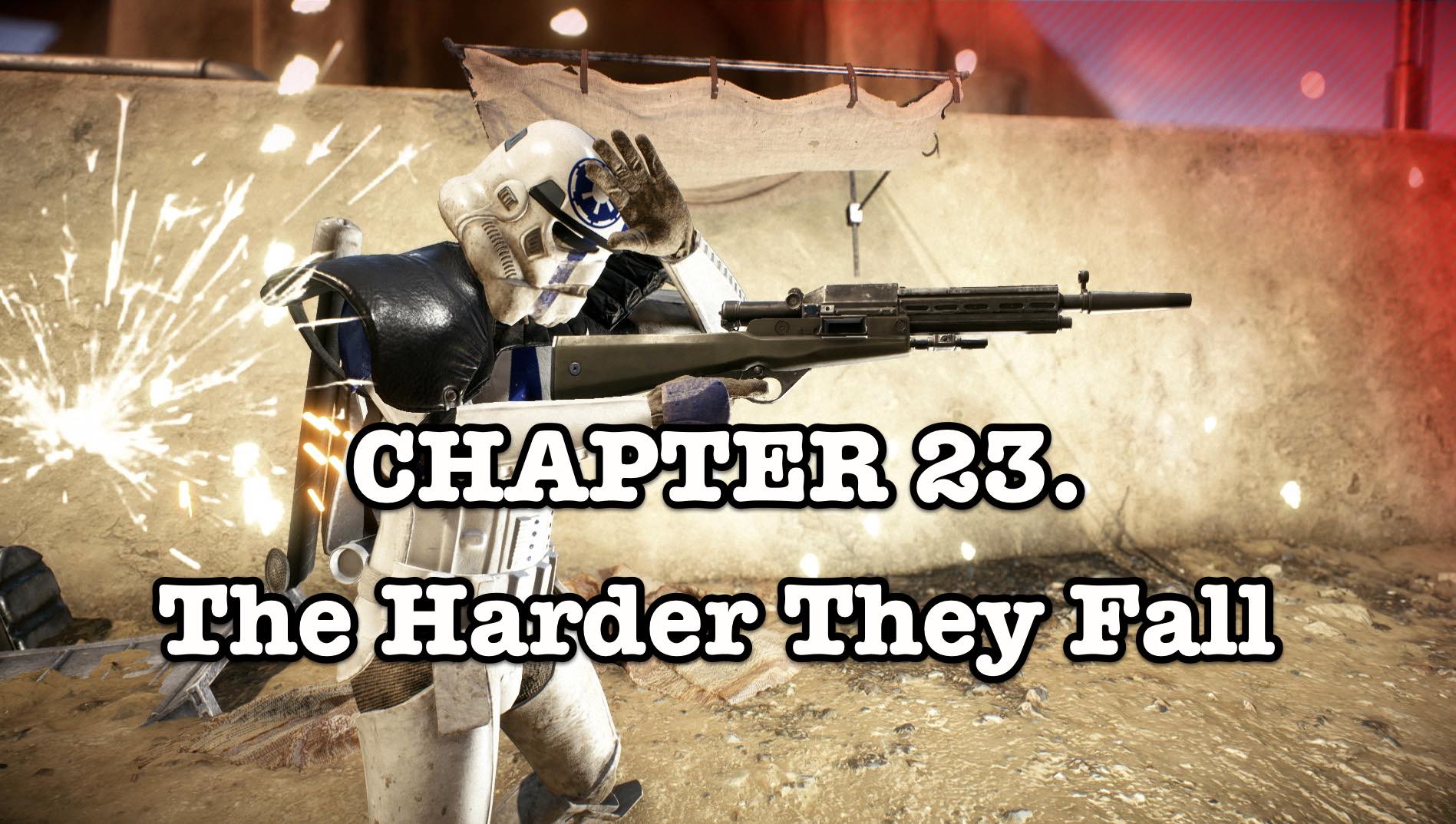 -The Harder They Fall-

“After our retreat on Sesid, New Republic Forces were hot on our trail. The atmosphere amongst the troops was,… tense. We were tired, and near broken. The trooper I had ended up rescuing survived- TK-3342, her name was Teeko Sal’iv. A human, was very appreciative that I rescued her. I guess they don’t teach the importance of no trooper left behind at the Storm Trooper Academy on Coruscant,.. but what else could you expect from a non-clone in combat..

What I didn’t expect, was how close she would stick to me in combat. The small fleet Starkiller had assembled was running on fumes. It was comprised of one Capital Star Destroyer, 3 Frigates with about 100 TIEs between all of the ships. Even their fuel was being used to get us away from that fleet.

After the formation of the New Republic, the Empire’s allies were faltering. The closest planet that would even consider giving us fuel was Tattooine- a planet that we had eradicated a city on.

Fortunately, the Hutts didn’t care. After the murder of Jabba the Hutt at the hands of Skywalker, the Hutt Cartel wanted revenge, and wanted to supply us.

As we were loading into the shuttle, I heard my name called by a familiar voice. It was TK-3342, but this time in different armor. Her armor when I had rescued her was badly damaged, so the Empire issued her a new kit, still donning the black and red regalia.

She approached our shuttle, and walked right up to me. She then stated that she had formally requested to be transferred to my unit, which was approved without my consent. Not like I could refuse the help anyway…
Three shuttles were sent to the Space Port of Mos Eisley, an infamous location known for scum and villainy throughout the galaxy.

And the scum came out of hiding.

While we started gathering fuel, New Republic forces started pouring out of the Local Cantina- and they were heavily armed. I returned fire and ordered my troops to retreat back and secure the fuel cells, if we lost them we weren’t getting off this planet alive.

While the majority of the troops obeyed my orders and began to fall back, 3442 didn’t. As blaster bolts flew past missing me by near inches, several collided into my armor- wincing in pain I raised my blaster to return fire, a T-51 I had found in the shuttle. I however, was outnumbered by the New Republic forces- but I was ready to lay down my life so the fleet could escape. 3442 realized this, and tackled me into cover behind a building.
When I came to my senses, I asked her why she dis-obeyed a direct order to fall back. She looked at me, I could tell by her voice she was smirking under her helmet. Stating: ‘Well, someone had to save your ass, cause you were doing a terrible job of it.’

I shook my head, grabbed my blaster and ordered her to stay behind me. In pain, sore from the bolts that had collided into my armor I stood up and started moving towards where I could hear blaster fire.

I eventually came upon my own men, who were engaged in a firefight defending the fuel cells as they were loaded onto shuttles to be taken back to the fleet. This was our life line, if we lost then that means the Empire would be over.. we couldn’t let that happen.

It was then I knew what had to be done. Gritting my teeth as I struggled to move as the sand that was trapped in the crevices of my gear worked against me, I grabbed a heavy repeating blaster and proceeded to move to the center of the complex we were forced into to load the fuel cells.

While the troops loaded the fuel cells, I let hell loose upon the New Republic Forces. Taking down squad after squad, trying to hold their advance to buy my squad some time.

Blaster bolt after blaster bolt collided into my armor as they focused on engaging me, forcing me to slowly retreat- but I kept firing. I kept firing until my heavy repeating blaster was too hot for me to hold. I threw it at the oncoming forces and then myself into the shuttle.

We were able to get off planet somewhat safely, and managed to get all three shuttles stocked with fuel back to the fleet safely. We quickly refueled, and got out of the Outer Rim, heading towards some destination under Starkiller’s orders.

When I left the shuttle, I started walking to my bunk. I was ready to remove my armor and lay down on my wool cot, to sleep till the next battle. That is,… until a familiar voice called my name from behind.

I turned to see Teeko yet again, this time without her helmet.

To ask if I wanted to go for drinks.

And to my surprise, I didn’t sleep alone that night…”