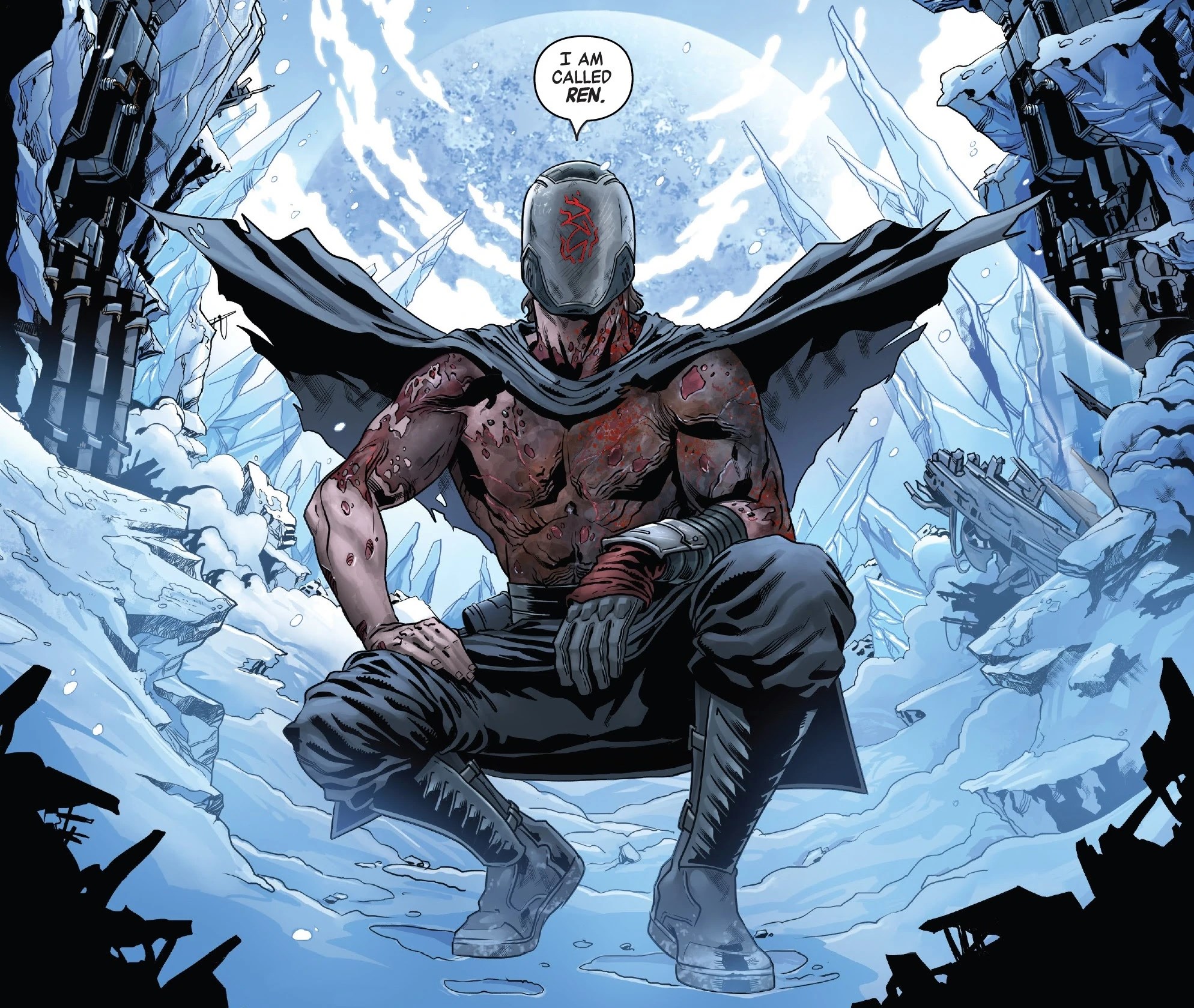 The Knights of Ren was an enclave of masked warriors who served Kylo Ren—master of the Knights of Ren and Supreme Leader of the First Order—during the New Republic Era. They were neither Jedi nor Sith, but members of a new generation of Force-sensitive adepts that emerged to fill the void left by the demise of the last Sith Lords. Adhering to the ways of the Ren, a philosophy epitomized by the lightsaber, the Knights roamed the galaxy causing wanton destruction as devotees of the dark side of the Force. Armed with distinctive weapons for ranged and close-quarter combat, they were fearsome enforcers of their master’s will.

So they were dark side force sensitives in short. Like the Inquisition after the fall of the Empire.

The Knights emerged from the Unknown Regions in the aftermath of the Galactic Civil War, when the Galactic Empire fell to the New Republic. They once followed a warrior known only as “Ren,” until Ben Solo joined their ranks after the resurgent Jedi Order fell back into ruin. Supreme Leader Snoke gifted the Knights to the newly christened Kylo Ren, who renounced his former identity and the Jedi Code. Strong with the Force, Kylo was heir to the powerful bloodline of the Sith Lord Darth Vader, but, unknown to him, the Knights’ true loyalty belonged to the resurrected Dark Lord of the Sith, Darth Sidious.

Thats right. During the whole movie series, the knights of Ren know that their true leader is Darth Sidious. They just leave that detail out when Kylo starts conquering the galaxy.

The Knights of Ren once sought out Karrst and his younger brother Filin, both of whom were wanted for murder by the Sector Security organization. Having learned of Karrst through a friend of the Knights, they spent some time looking for the siblings, who were almost captured by Sector Security when the dark gang found them. The Knights immediately descended on the lawmen, pushing them back and establishing a secure perimeter around the brothers. Using their weapons and Force abilities, the six Knights slaughtered the SecSec team while their spokesman, the warrior known as “Ren,” approached the would-be prisoners.

Ren was their leader by the way. He was really interesting… considering doing a post on him as well.

Ren assessed the situation and concluded that SecSec was determined to apprehend Karrst and Filin, who were responsible for killling at least a hundred people. Though the Knights were also after them, they did not wish to capture or killl them. Instead, they wanted Karrst to join their ranks.

Karrst was like the Knights, possessing an inherent sensitivity to the Force or “shadow” as the Knights referred to its dark side. Karrst was able to demonstrate his natural ability with telekinesis. His talents impressed Ren and demonstrated proof of what the Knights learned about him from their contact—that Karrst could touch the shadow. Filin pledged his allegiance and that of his brother to the Knights, promising to follow Ren if the Knights helped them to escape from the SecSec forces. However, Ren clarified that it was not he whom the Knights followed, but rather his lightsaber and the way of life that it represented. Ren devoted his life to living by the Knights’ code; immersing himself in the shadow, he fought its battles, preserved its artifacts, and consumed the power it gave him. He invited Karrst to do the same, but first they required a sacrifice: the murder of his brother. Before Karrst could make his choice, Filin fatally shot his older brother.

In doing so, he believed the Knights would let him join their ranks in Karrst’s place. While Ren applauded Filin’s actions, respecting his willingness to commit fraticide in order to survive, he ultimately killled Karrst’s younger brother who was not born with a strong connection to the Force. Trudgen noted that the mission did not go as planned, but it was of little consequence to Ren, who believed that their master would eventually find someone else for them to recruit. In the meantime, they sought to cause destruction elsewhere, leaving the ground littered with the corpses of the entire SecSec team and those of the now dead siblings.

Yeah you read that right. They killled the guy who killled his brother to join the knights of Ren. Karma.

mfw when the comics are better than the movie franchise because not only are the Knights of Ren cool, Kylo’s not a little b**ch either (Note, I love Adam Driver. But good god, I could shoot the writer who scripted Kylo.)

The Knights of Ren ventured to the Outer Rim world of Elphrona and found an ancient Jedi outpost dating back to the time of the High Republic Era. (Yes, the book series) The Jedi of the time used it as a storage site, and having never returned to gather their items, it was more of a treasure trove than an outpost.

Among its artifacts were Jedi holocrons and exotic weapons. Ren and his Knights intended to raid the outpost and take everything of value. However, the outpost was also visited by Jedi Master Luke Skywalker, his young apprentice Ben Solo, and the explorer Lor San Tekka. In addition to mentoring his nephew in the ways of the Force, Skywalker scoured the galaxy searching for arcane lore that could aid his quest to rebuild the Jedi Order. Shortly after entering the outpost, Skywalker and Solo both sensed the the Knights of Ren emanating with the cold presence of the dark side
dun dun duuuuuuun

Skywalker claimed the outpost and its treasures as the property of the Jedi Order, which, at the time, consisted of himself as the last Jedi. Notwithstanding his claim to Jedi artifacts, Skywalker had no intention of allowing them to fall into the Knights’ posession, having sensed the dark side in all of them. Ren regarded Skywalker as an old fool, believing that a single Jedi was no match against the combined power of his Knights. When Solo stepped forward, introducing his master and calling him a legend, Ren simply introduced himself and the warriors under his command as the legendary Knights of Ren.

Little note here. Notice how Ben hypes up Luke, calling him a legend and what not. While Ren is simply reserved and introduces himself and his warriors.

This makes me think of the phrase from Dooku: “twice the pride, double the fall” as Ben is super confident in Luke’s abilities. But Luke ends up crying himself into hiding while Ben goes on an emotional tangent across the galaxy resulting in the death of his father.

His warnings ignored, Skywalker instructed his apprentice to protect San Tekka while he personally dealt with Ren’s Knights. As the Knights and Skywalker prepared for battle, Ren was musing on how it was almost be a shame to killl the last Jedi, as it would be the first and only Jedi he would ever get to killl. Regardless, he gave the order to attack, causing the Knights to spring into action. With the exception of Ren himself, the other Knights charged in unison, assuring themselves that one man who stood alone against six warriors could not win. Though Skywalker conceeded that he was indeed one man, the Jedi knew that he was not alone with the Force as his ally. Despite their efforts, none of the Knights’ attacks managed to connect, as Skywalker either blocked their weapons or evaded them entirely. Knowing they could not defeat him, he used his green lightsaber only as a means to defend himself and was content to defeat the Knights but without killling them.

With the Knights incapacitated and their weapons destroyed, Ren stepped forward to confront Skywalker himself. Ren activated a killl switch on his lightsaber and revealed that it would explode if the weapon left his hand. However, after observing the last Jedi in battle, Ren concluded that the Force was strong with Skywalker and was no longer certain that he could prevail. Unwilling to die for the artifacts inside the outpost, Ren chose to stand down and retreat with his Knights, leaving the Jedi to claim their prize. Before departing, Ren turned his attention to Skywalker’s young apprentice. He sensed that, like themselves, Solo had the presence of the shadow within himself. Ren also removed his helmet and threw it at Solo’s feet, telling the boy to seek him out when he was ready to join the Knights of Ren.