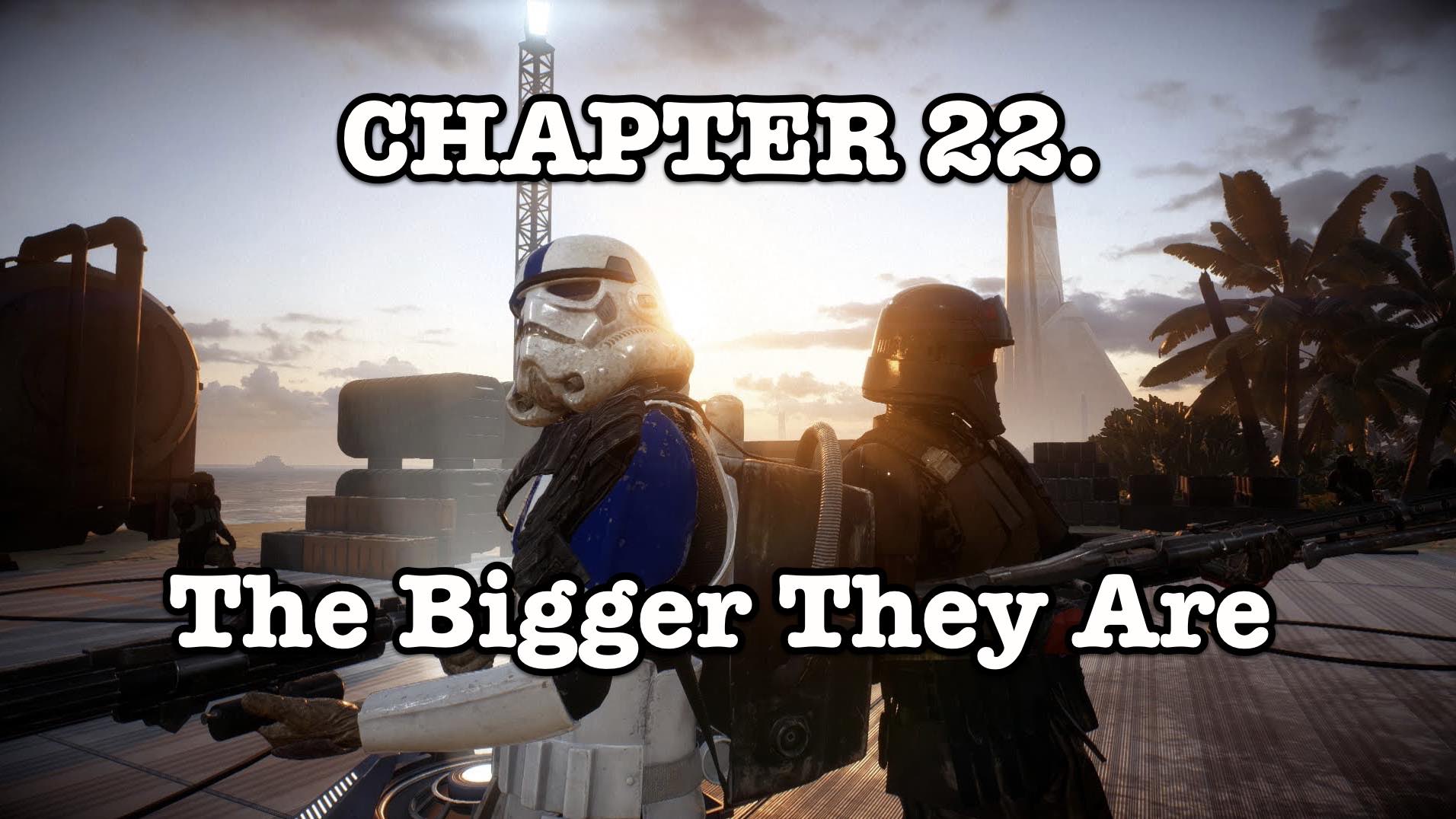 -The Bigger They Are-

“After the destruction of the DeathStar- marked the end of the Empire. A good portion of the fleet was destroyed defending the station- the rest of the Imperial Armada were splintered throughout the Galaxy. The Imperial Grand Moffs held a conference to discuss the Empire’s next move. The Emperor did leave droids in his absence to leave final commands-but not all of the leading officers decided to follow the orders. The focus of the operations seem to center around something called ‘Operation Cinder’- a weapon capable of mass destruction. This was to be used as a distraction as the Empire regrouped and refocused our efforts.

Our new leader however, cared very little of their dealings. We had our own Agenda to accomplish. We had to be very careful in our deployments as every trooper that fought for the Empire were now in limited supply as the majority of our resources were cut off upon the establishment of the ‘New Republic’.

Our leader, Starkiller- dispatched us to the vacation Planet known as Sesid in the Outer Rim. We were in search of some type of relic that Starkiller was after-hopefully one that would end this ‘Republic’ that the terrorist now call themselves.

Starkiller did not set foot on the planet- in fear that if a Sith was seen, the New Republic Forces would be ontop of us in no-time. And we weren’t ready for a full scale confrontation….yet.

Unfortunately- they were ready for us as soon as we hit the planet. Our guess was a traitorous agent had tipped them off that we were coming, resulting in them sending a force to wipe us out. The troopers that served under Starkiller wore different armor, akin closer to Purge troopers. Black and red versus the stormtrooper white.

The color of their armor didn’t matter, as they fought with the spirit of warrriors. I felt something I hadn’t felt since the Clone Wars- actual competent soldiers.

Afer losing my T-51B, I was able to find a DC-15, modifying it to launch explosive bolts versus the regular blaster bolts for more damage. We’d need it.

When our shuttles landed, we were met with an ambush. This resulted in several AT-ATs with more troops being sent to the planet so we could acquire the artifact. The rebels were heavily armed, sending ion torpedoes into the AT-ATs causing heavy damage, while their heavy repeating blasters decimated our ground forces.

We eventually secured a perimeter around one of the Imperial bases on the planet, the one that stored the the Sith artifact. As blaster bolts tore through the tropical fauna that surrounded our position, I looked to see an AT-AT fall, but not before witnessing an ISB agent leap from the interior, and land on the ground taking cover in the wrecked remains firing on Rebel forces.

They had us surrounded, blaster bolts in every direction. Our numbers were dwindling, and we were given the orders to retreat to the landing pads and get off planet, seeing as we secured the artifact.

We were so entrenched in our position, that you could barely expose yourself to return fire without being struck. The shuttles finally arrived, with troopers running for their lives towards it- I stood up to draw the enemy combatants fire and lay down some cover for those retreating. What I didn’t expect, was to be back to back wiith another trooper.

This trooper and I both lit up the surrounding brush with blaster fire, aiming for anything that moved. We were able to buy the other troopers some time as they loaded onto the shuttle, and yelled for us to follow suit. Before we left from our position, the trooper that I was back to back with had taken a blaster bolt to the chest and collapsed on the ground.

Without thinking twice, I grabbed my DC-15 with one hand and hoisted the trooper over my shoulder and began running for my life towards the shuttle. I made it in by the skin of my teeth- practically throwing him in while launching myself.

As our shuttle began to lift off, I looked out to the battlefield to see the republic forces executing the surviving storm troopers, taking no prisoners. I even saw them burrowing into the fallen AT-ATs and throwing thermal detonators inside to killl off the survivors. Savages…

The mission, was a success. But it made me wonder, at what cost? How would we recover from this?

Or are the Empire’s days truly numbered?”