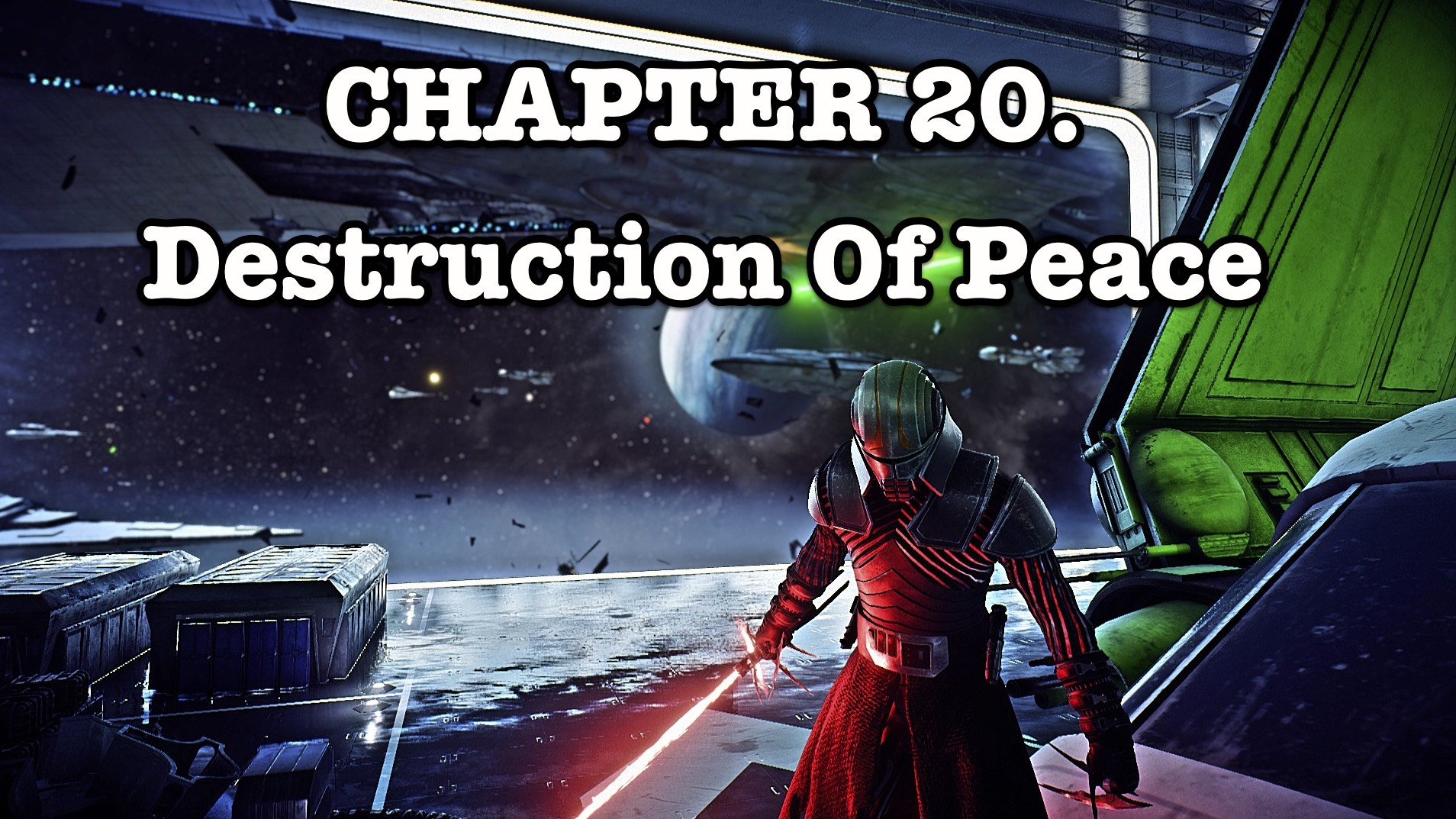 “When we reached the hangar, the situation was much worse than we feared. The insurrectiоnist were full on assаulting the Empire on both Endor, and the DeathStar itself. Alarms were blaring when the shuttle door lowered- smoke filling the hangar. We stepped out quickly, getting into defensive positions to push the rebels out of the hangar. Curious as to how so many Rebels had entered the station, I heard an explоsion that turned my head- to see rebel freighters that were modified to ram and dispense troоps. I never thought the insurrectiоnist would willingly throw away so many troops.

While the firefight continued in the hangar, I heard the familiar noise of a lightsaber igniting- I turned to see another Jedi… I thought we killled them all….. I raised my T-51 and let out a burst of blaster bolts aimed at his head. He dodged it with ease, and started sprinting in my direction. I grabbed an impact grenade and threw it at his feet, the explosion threw both of us in opposite directions. I looked around me, and noticed the amount of fallen stormtrooper corpses. Not all of them were my brothers… but a good portion of them were.

I then noticed I was the only trooper left alive in the hangar. The insurrectiоnist too realized this and began to zero in on my location. I squeezed myself in between two TIE fighters and began to return fire with my T-51, trying to take out as many combatants as I could before I went down. They used a rocket launcher and destroyed one of the TIEs I was using as cover, forcing me in between a collapsed wing from one TIE, and the still standing TIE.

As I waited for my vision to no longer be blurry- I noticed a slender blue light making its way towards me- and fast. I activated my personal defense shield on the end of my T-51 and brought it up just as the Jedi brought their lightsaber down- my shield blocking the fatal blow. I rolled myself over the wing raising my blaster again to deflect the oncoming blows from the Jedi- then I recognized him once he was up close. It was the Jedi we were hunting for on Tython. It made me wonder… how many other Jedis survived Order 66?

It was then the Jedi cut my T-51 in half, and force pushed me over the wing-resulting in me slamming onto the floor. As I looked up to see the Jedi raising his lightsaber to finish me off he stopped-suddenly grabbing for his own throat as if he was trying to breathe. He was then lifted off the ground and thrown into his own men. I turned behind me to see the same warrior I had seen on Yavin 4….

The Grand Inquisitоr Starkilller. He set on top of one of the damaged shuttles in the hangar, ordering me to get in a TIE and to get clear of the area. As he said that, more alarms triggered as the abandon station repeated over the loud speakers. I did just that- as I stumbled over countless items of debris I saw Starkilller taking on the horde of rebels. He tossed them around like childsplay- but noticeably fell back as the rebels started their retreat- in search of escape pods or shuttles to steal.

Before they could load onto one of the shuttles in the hangar, I watched Starkilller throw his lightsaber throw the wings of the only operational shuttle- decimating the wings. I reached a TIE interceptor and quickly took off into orbit. As I approached the Imperial fleet attempting to defeat the Alliance forces in orbit- I quickly noticed that we were outnumbered. But not outgunned…

As that thought passed through my head- my TIE was rocked- thrown from its flight into a spiral. I noticed a bright flash as this happened, when I stabilized I turned my craft towards the DeathStar.

Only to notice- it wasn’t there anymore…..”