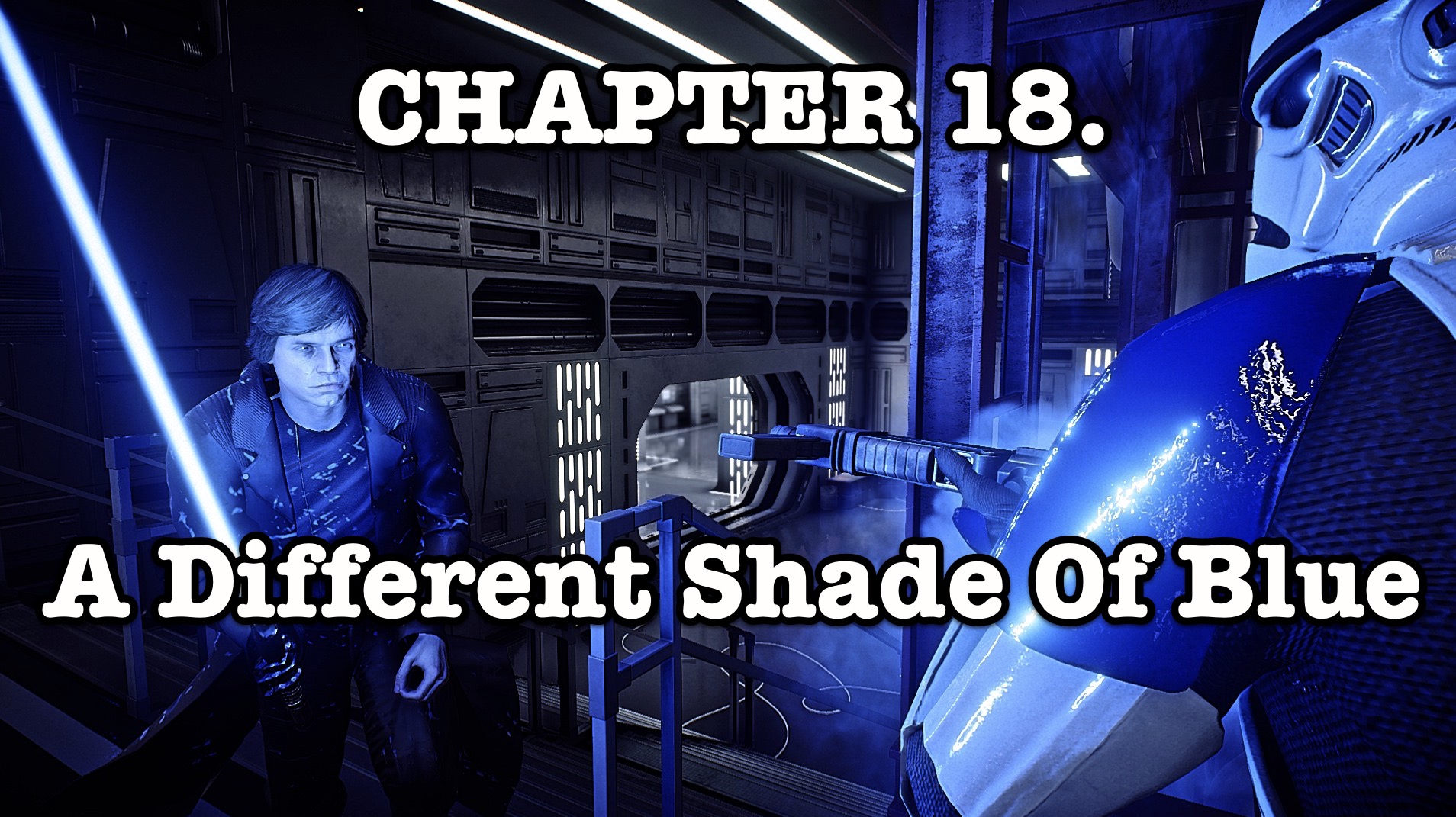 -A Different Shade Of Blue-

“I wasn’t sure what battlefield I was on, I remember it was cold. Snow crunched underneath my boots as I ran, being able to feel the heat from the explosions around me through my armor. My armor was.. different sleeker, and my blaster was similar but had white accents…. I then remember a red flash piercing through my body- then I woke up to find myself in my private quarters.

I shook my head and got up, and began changing into my armor. As I put on the black body glove we wore underneath our armor, I look at myself in the reflection. Bearing many scars across my body, remembering where each one originated from-ranging from body-part replacements to blaster bolt wounds. I recalled how my hair was starting to gray- I then looked down at my armor which looked similar. Covered in scratches, blaster-bolt burns and dirt. We were one in the same.

After I was fully kitted, I had begun my patrols through the transport we were aboard. This Frigate named ‘Sso iiaa’ was transporting special equipment that was to be used in the development on the Empire’s new project- another Death Star. I assumed that whatever schematic flaw that was installed in the prior design would be taken care of. Or hoped so.

I was in the Mess Hall when I heard the first explosion. At first I figured we hit something in Hyperspace-while rare, it does happen. That was until I heard the alarm sound off that we had been boarded. Somehow, the insurrectionist had learned of the second Death Star’s plans for construction and had attacked us in Hyperspace. I could only wonder as to how they could hit us in such a way, but prepped my blaster nonetheless.
The insurrectionist had rammed a modified freighter into our ship and were pouring from the wound they had created- heavily armed. These troops were dressed different… I assumed they were rebel elite forces. That was confirmed when I saw a blue lightsaber ignite- illuminating the black coat. Of course, the Jedi must be retaliating from the Strike on Tython- Skywalkers forces. I alerted the security forces on the ship, comprising of mainly clones from the 501st Legion, as we were trusted with these high security missions.

They flooded into the ship like parasites, trying to sabotage every piece of equipment they could find. The hallways and corridors of the ship filled with a symphony of blaster fire, illuminated with red and blue flashes from a lightsaber as they pushed forward through the smoke emitting from their ship.

Skywalker was near unstoppable- he cut through the security forces on-board without mercy. I thought my end would be near when he headed straight towards me, I had learned from my time. I loaded a slug into a shotgun that I kept on me for such encounters. As he got close enough for me to see the whites in his eyes and the reflection of his lightsaber on my armor, I fired the slug. He realized his mistake almost too late, jumping back and used his lightsaber to attempt to block the shot. This resulted in the slug shattering into metal pieces, some getting caught in his coat and damaging his metal hand. This bought me some time to run to another position and refortify.

Skywalker must have been very quick on his feet to survive that slug, or had a really good medic. He regrouped his troops and continued to press deeper into the ship. When he came to our position, he slammed down in the center of the control center which shot out a wave that threw me out of the room and down a flight of stairs. My armor was the only thing that kept me alive from that- I regained my composure and drew my heavy rotating blaster. I saw him at the top of the stairs, and raises my heavy rotating blaster. As I looked at him though- I recalled his name. Skywalker. My general during the clone wars was a Skywalker- it made me wonder…

That hesitation almost costed me my life. As I snapped back into reality, I saw the Jedi attempt to approach. As my blaster barrel rotated and fired, the Jedi extended his hand catching the bolt in mid-air, and threw it back at me. It slammed into my armor, and sent me spiraling back. Two troopers had seen what had happened, and grabbed me and headed in the direction of the infirmary.

The insurrectionist eventually got the data they were looking for- leaving in their frigate at the costs of many rebel and imperial lives. Fortunately the casualties on our side were not too severe, but they did a number on our ship- and we were limping back to our destination for repairs.

The Empire would definitely take note of this, I just hope Vader will be merciful.”