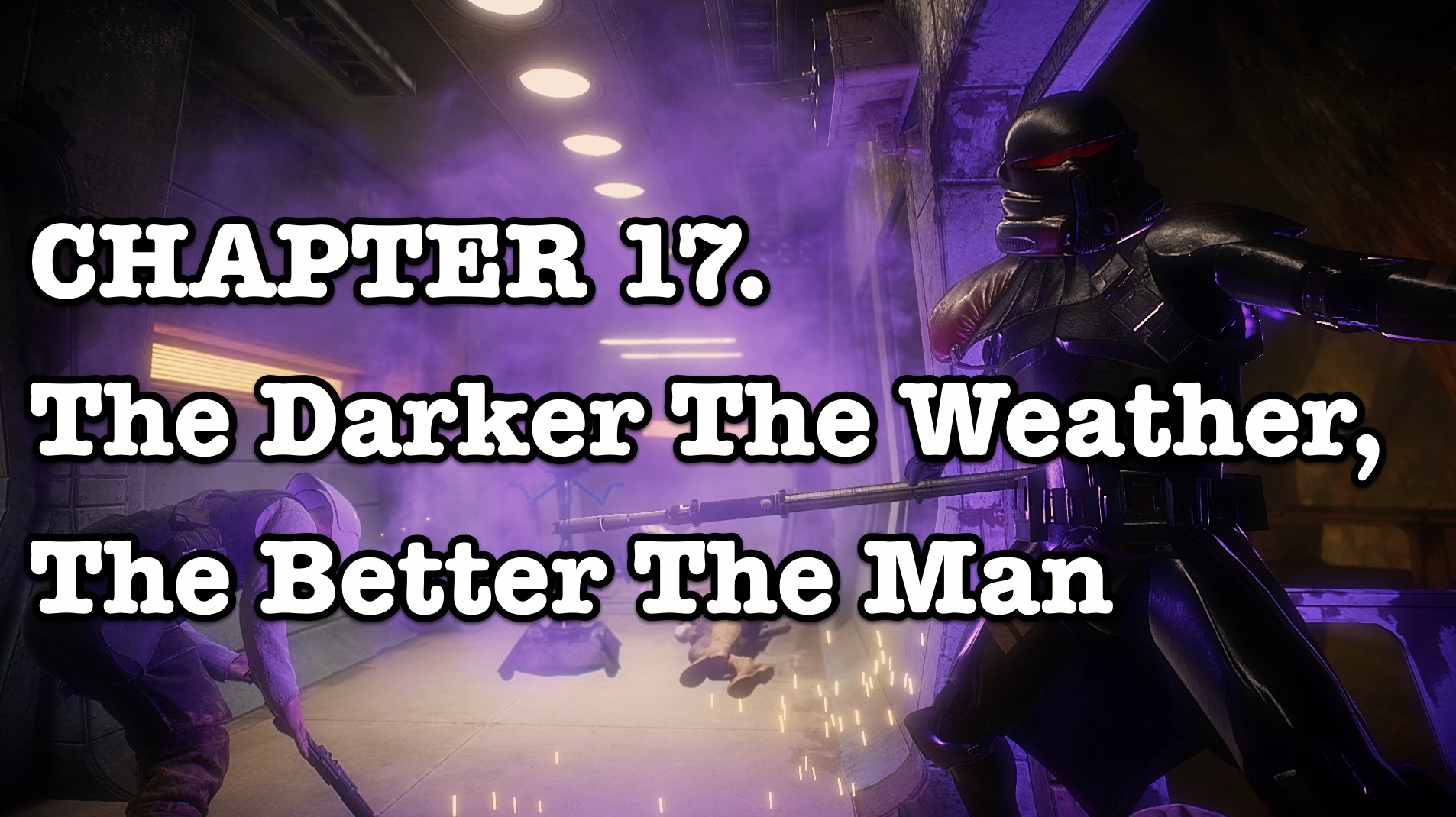 -The Darker The Weather, The Better The Man-

“I wasn’t sure how to feel about this mission when the orders came down. Then again, I didn’t know how to feel during Order 66. But it didn’t matter… for I am a good soldier…

The mission was a clean up detail on the planet Tython, and only those who were clones were dispatched. The reason needed for the clean-up? An imperial operative was sent after a rumor of a Jedi on the planet. This operative was suppose to be top secret- top secret to the point that anyone who witnessed him had to be put down.

And that’s what we were sent to do. We were to do this assignment with Vader’s own Purge Troopers. We all loaded into three imperial shuttles, and headed towards the planet.

As we began our descent, I felt a familiarity of silence. The same feeling and…. ‘silence’ that I felt during my deployment to the Tree-top cities of Kashyyyk during order 66. I… I didn’t know how to feel. But… we aren’t trained to feel. We are trained to fight, and follow orders. While we had a few minutes of silence to collect our thoughts, I put on my helmet and secured the air-tight seal- readying my T-51 for what we were about to do.

We arrived early in the morning. The village sat at the foot of a old Jedi Temple built into the side of a mountain- it wasn’t a very advanced planet but from reports, the locals had burrowed into the mountain under the temple, living underground. The towns people weren’t prepared for our arrival, still weary and terrified from the last operative that paid them a visit in pursuit of a Jedi. When the shuttle doors opened, the Purge Troopers didn’t even wait for them to open fully. They jumped out electro-staffs in hand, and disabled the only security force comprised of four poorly trained men who were captured and hauled into the shuttle. When the rest of us poured out of the shuttle, the Purge Trooper Captain ordered us to fan out and eliminate anything that was alive.

We broke up to individual teams and proceeded to clear out and kill anything in our path. The locals… weren’t even armed. This wasn’t a battle- this was a slaughter. Many of them tried to flee to the depths of the cave system they had created but our sniper set up at the entrance of the ‘town’ gunned down every one that dared risk being exposed to escape.

As we were clearing the makeshift ‘huts’ and homes of the locals I turned the corner aiming my T-51 to find two small twi-lek girls huddled by each other. I scanned the rest of the room for any possible combatants, then focusing on the two girls again. I surprised myself that day… I looked at them, and told them to stay put until we were gone, and left them there.

As we finished up executing the remaining witnesses, I overheard some of the Purge troopers. I had at this point learned they too were clones- but were given a different purpose- they served the Imperial Inquisition- force sensitive users that fought for the Empire’s interest- and hunted Jedi. The particular Inquisitor that had visited this planet was known as Starkiller. I had heard rumors of someone with this name engaging and killing Imperial forces- but those were just rumors. What I knew for a fact however, is that the same operative was on Yavin 4 when the Death Star was sabotaged- I then realized I had met that operative- and was very lucky to be alive.

We were also told about the Jedi that the Operative was hunting. The townspeople were apparently hiding the Jedi- who had defeated the operative and escaped. This clean up mission was also meant to send a message- that anywhere the Jedi tries to hide will bring death to those that assist them. In theory, we were hoping this would draw the Jedi out of hiding. Some times it worked, other times… it just ended in death.
As we were loading into the shuttle, a rock clattered against one of the folded wings. We turned with our weapons raised to find two small Twi’lek girls with rocks in their hands. After they realized we had seen them, they turned to the other direction and ran. I gripped my T-51 tightly to the point where it hurt my hand, as I was doing all I could to keep myself from raising my blaster. The girls split up, one running into a hut while the other ran into the cave system.

The Purge Captain calmly retrieved a thermal detonator from his belt, activated it and threw it into the hut one of the girls had ran into. We turned our backs as we heard an explosion, then a scream…
a scream of sorrow and pain. One that I had let out after seeing many of my brothers fall during the battle of Geonosis. One I was all too familiar with.

As the shuttle ramp began to close, I used my helmet to zoom in on the remains of the town in the mountain- to see a young twi’lek girl outside the remains of her home.

Wherever this Jedi is… I hope he heard that.

And knows, that he is responsible.”