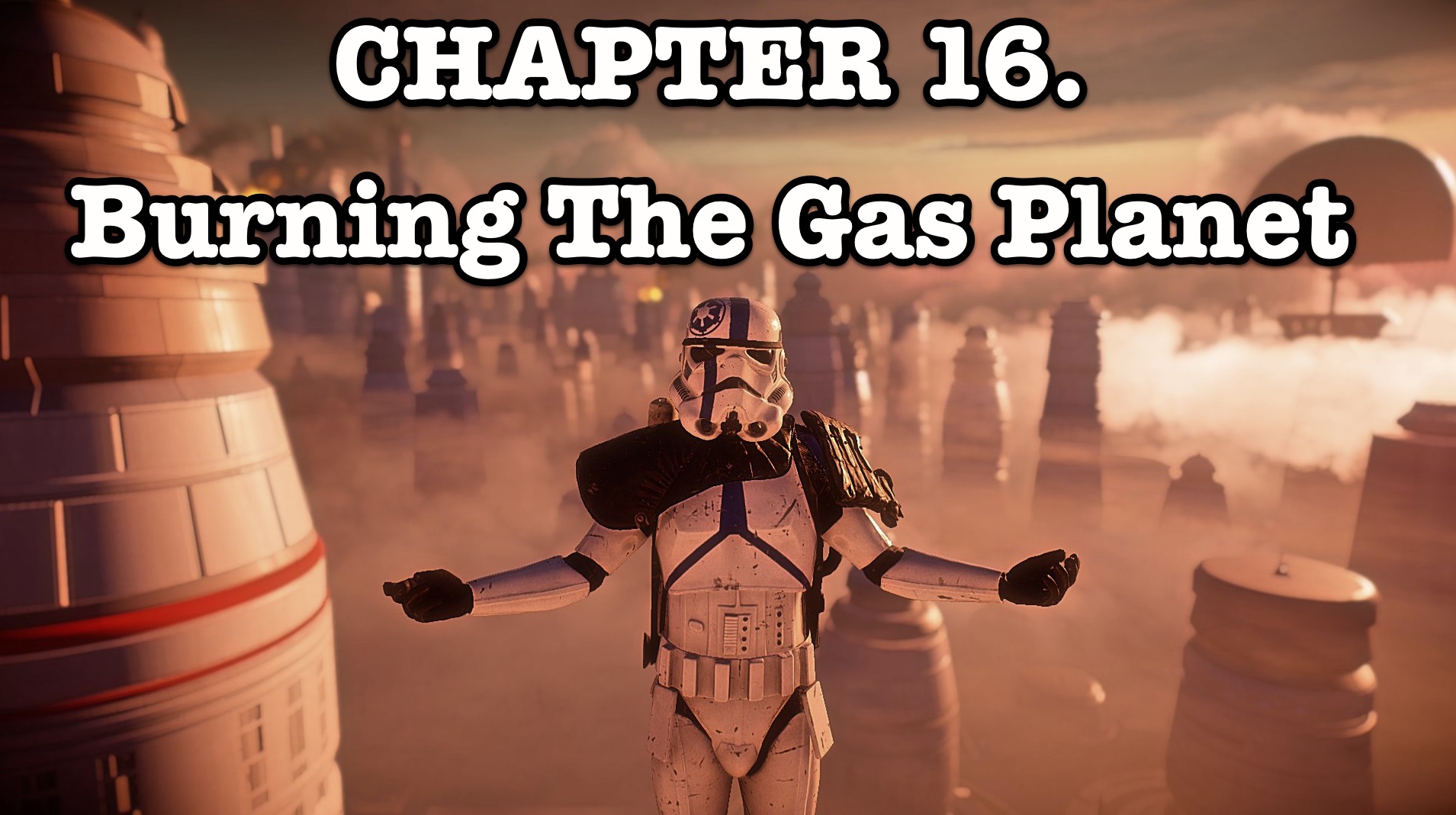 “Our pursuit did not end at the Battle of Hoth. We were going to chase these scum into whatever crevice they tried to hide from us in. Lord Vader for some reason believed a Jedi known as Luke Skywalker was the key to taking down the Rebellion- Vader had suspected that Skywalker would head to the cloud city on Bespin- so we were ordered to occupy the city quickly and quietly. Its a shame they didn’t want to comply.

We had to do this before the scoundrel known as Han Solo arrived with the Jedi. The leader of the City was a man named Lando Calrissian, and we had to bend his arm to comply. A lot. When we first arrived, he greeted us and Lord Vader with an armed entourage. Vader did not take this lightly, picking up the security guards and tossing them over the side of the platform like it was nothing-demanding the City help the Empire in the capture of these criminals. They didn’t want to assist- so we showed them what happens when you refuse the Empire aid.

We burn your city down. And we almost did.

The security force’s resistance was almost laughable. Even though the majority of Vader’s Fist were new recruits, the clones still were in charge of the battlefield. Vader brought a large amount of personnel on this mission, including the services of a bounty hunter named Boba Fett to assist in the capture of these fugitives.

When I stepped out of my shuttle with my squad, I was not surprised to see Purge Troopers emerge from another shuttle. Whenever there are jedi involved it seems, these types of trooper get involved. I heard them speak for the first time and it made me stop in my tracks. The purge troopers were clones… were we still being made?

I shook my head, that didn’t matter. The mission, thats what mattered. As I looked around the platform, I saw what looked like to be bespin’s security forces attempting to fight back. My squad moved in to engage, rallying behind my personal shield-peaking their barrels over while open firing. What I didn’t expect was for a Purge Trooper to be leading the fight.

He ran in front of us dodging blaster fire, and returning it right back to the security team. They fought hard, using their blaster pistols and detonators to mow down our men. It was a tough fight, but the Purge Troopers combined with our assistance, we pushed the security team into their center communication room, to which they had barricaded themselves with Lando. We ordered them over loud-speakers to exit the building with their hands up, or the people of Bespin would suffer the consequences. We were met with silence and a burst of small arms fire, forcing us to spread out and take cover. We provided them with one more opportunity to come out, but that too was met with silence.

Then the bombs dropped. The screaming of TIE engines could be heard coming from the sky. I looked up to see a squadron of TIE-Bombers fanning out across the city. A few minutes later, we could see the bombs being dropped onto the city- not something I wasn’t used to. One of the newer recruits asked me why we were doing this- clearly not familiar that Bespin had rebelled once before. I turned to him, raised my arms and said ‘Witness what happens when you deny the Empire.’ as the city burned down behind me. After they saw the consequences of their actions- the entire security force including their leader Lando exited the comms building with their hands up, the look of shock, anger and sadness expressed upon their faces when they looked at their home.

The Purge trooper ordered Lando select 3 individuals to go with him to see Lord Vader, while the rest would remain in our custody. Lando did, choosing a man with some type of computer attached to his head and three security officials. They walked off being escorted by one of the Purge Troopers.

The Purge Commander then turned to us, and told us to demonstrate what happens when you oppose the Empire. Then he walked over, picked one of the rebels off and threw him off the platform.
Then we open fired on the rest.”