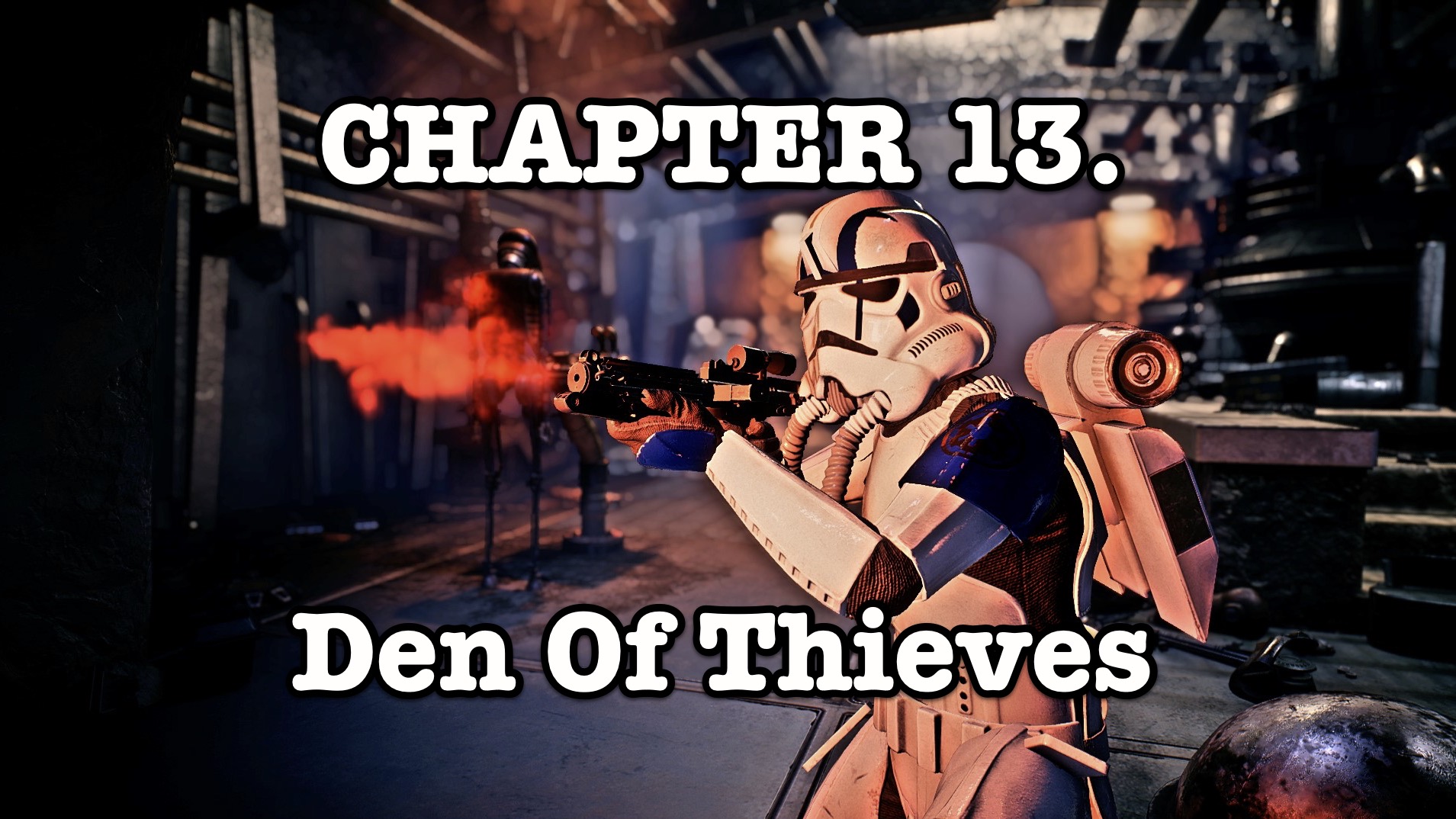 “Lord Vader had to go on an assignment in the Scarif system, something about a weapon the Empire was building that he wanted to personally see to. The brave men of Vader’s Fist were being dispatched back to Tattooine, for there were rumors of another rebel insurgency forming- and we weren’t going to let that happen again.

I was promoted once again this time to Lieutenant of the 501st- a proud member of Vader’s fist. For this promotion, I was given a new kit of armor. It was lighter, more agile and was complete with a jump-pack fixed to the back plate of the armor. I traded my T-21B for an 3-11 blaster- it being smaller and more compact made for more accurate firing patterns during close quarter firefights. And I’d need that for this mission.

The terrorist had set up a base located in an old temple lost to time. Our plan was simple- send in a small squad of 6 men to secure a foothold, then reinforcements would be delivered via shuttles. My team crept from the sand dunes overlooking the temple. Being careful to cover ourselves with desert robes so our armor would be better hidden- we crawled on our stomachs for a brutal hour under the scorching sun. Our armor could only protect us but so much from the heat, as sweat trickled down my face underneath my helmet.

Each trooper with me knew the plan. After we arrived at the main entrance, to break off individually to secure access points across the temple- then meet at the center to cause chaos while our reinforcements arrive to finish the job.

When we reached the gate, we ripped off the robes that were camouflaging our armor. Now was its time to shine, and we wanted them to know what Legion hit them. Using my jump pack, I elevated myself to the roof and made an entrance from a fallen out grate, and jumped into one of the hallways. Four minutes. Four minutes is all we had before reaching the center. I moved quickly- it wasn’t long until I came face to face with a rebel that turned the corner at the same time I did. Unlucky for him. I raised my E-11 and let out a three burst blast. Two burn marks were visible on his torso, with one on his forehead. He fell back and hit the ground. Instinctively, I advanced in a crouched position and proceeded further into the Temple.

As I came around another hallway, I at the top right corner of my HUD displayed in my helmet. Two minutes and thirty seconds- its time to move. I sprinted down the hallway, careful to make as little sound as possible. One of the rebel war-fighters had entered the hallway from another room. In order to continue my momentum, I activated my jump pack and shot myself forward, my shoulder driving into the fighter’s chin sending him doubling back. I then raised my E-11, and fired a single shot to his head.

I finally reached the objective- the center of the temple. There were religious artifacts everywhere with ornate decorations in place. Strange that the temple was left with the interior intact- how long had the rebels been here?

It didn’t matter. We had a job to do. I began throwing three thermal detonators from my position- causing multiple explosion and limbs to fly. I heard more screaming alongside the sound of an E-11 fire repeatedly. Now the fight had started. As we began drawing more and more of them to our location, we were able to take the high ground- we were surprised they still came at us anyway.

Eventually, Imperial transports arrived on the outside of the Temple. The rebels didn’t know, but they had just gotten themselves surrounded in their own base by coming after us in the center. Brilliant.

The squad that came in with me eventually regrouped with me in the center, one of them was a non-clone surprisingly. He looked at me and said ‘Sir, they have us surrounded!’ I simply replied with ‘Good, that means we can fire in every direction.’

We kept their attention for another fifteen minutes of fighting- then the remainder of Vader’s Fist arrived to the center- either killing or capturing any fighters still in the area.

Even though we didn’t have Lord Vader at the helm, we were still able to complete our mission. I hope the mission he’s on goes as planned, because the galaxy would be better off without this planet….”