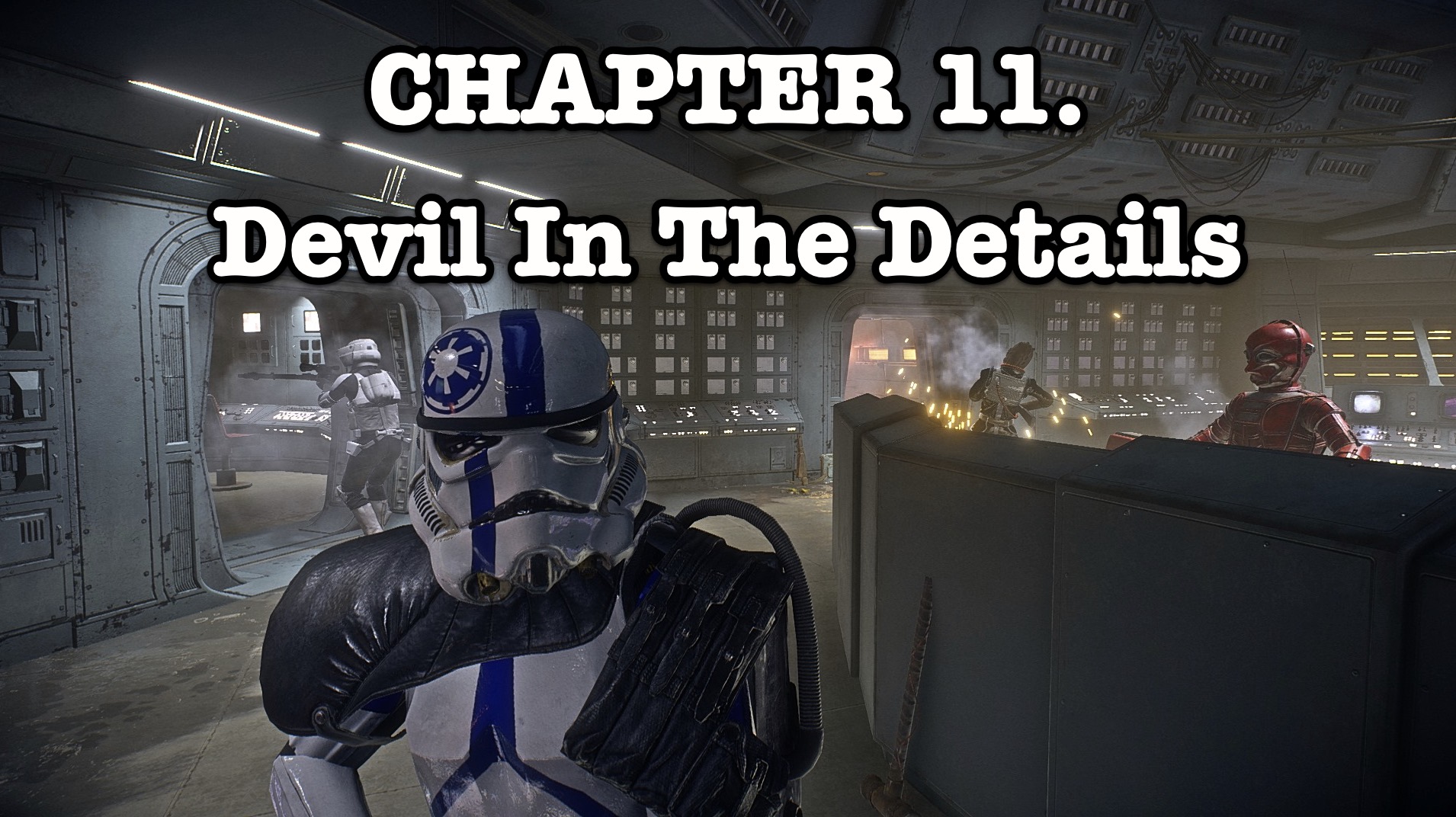 -Devil In The Details-

“After the failed assassination attempt the terrorist now calling themselves ‘The Rebel Alliance’, the men of Vader’s Fist wanted some revenge. To our surprise, we were approached by the command staff of the space station that told us if we wished to pursue after these self-proclaimed rebels, they would have just the individual we needed. At first, we were questionable- but were not in a position to decline help, so we did. Of a Transdoshan ISB agent.

His name was Graak, and he was a rather odd one. I had fought against Transdoshan slavers before in the Clone Wars, and had known about their lethal ability in combat. It was a strange feeling fighting next to one instead of against it. I will say, he was damn good at his job. He was able to track down the terrorist cell to a base on Kessel. We wanted revenge, and we were going to get it.

Our shuttles arrived en mass, we immediately took hold of the landing zone and quickly rounded up and civilians. Well, we considered them potential hostiles as well, but they were un-armed to the best of our knowledge. Perhaps we could use them as bargaining chips if need be- not that that’s worked before. The rebels- if they’re following Jedi care little for civilians, I saw proof of that on Kashyyyk. Our troops marched through the compound until we were fired upon from inside one of the complexes that stored communication equipment. At that point, all civilians were considered a threat and were gunned down as they were aiding the terrorist and we considered them terrorist themselves. Good soldiers follow orders, and we were ordered to fire.

But that’s not when the real slaughter happened. Graak was willing to fight right beside us, and had no problem being amongst the 501st. With our precision fire and his ferociousness we were able to push them further into their complex. They fought harder than we expected, and were very heavily armed. They rigged several hallways to explode- with our numbers already depleted from the assault on the battle-station, we proceeded to engage them in smaller numbers to preserve what remained of the legion- not accounting for the ones currently on a mission with Lord Vader.

Graak pulled out a type of grenade, and warned us to vacuum seal our suits- so we did to make sure no outside particles could infiltrate the suit. He threw the grenade into the facility- a green mist erupting from it as it was thrown down the hallway. We heard coughing, and what sounded like guns hitting the ground. Upon turning around the corner, we spotted several bodies on the ground not breathing. Others were sitting down, too weak to get up while others that were outside of the radius of the grenade fled to another part of the facility.

Upon the ones who were too weak to move, Graak identified as a rebel lieutenant. He began… interrogating her for more information- in a rather gruesome manner. I’m still surprised she lasted as long as she did, transdoshan claws are lethally sharp… and he certainly knew what to do with them.

After he concluded his interrogation- he told us that their main force was located on Mos Eisley on Tattooine, and that the desert planet would be our next destination to end this cell in particular. Good riddance.
That’s when the real slaughter had begun- at this point there were about 10 terrorist fighters that had been pretty much coraled into one room from Graak, who was beating them into submission with his own claws. He ordered us to stay out of the room with the terrorist, that they were his to interrogate. We were to hold and maintain the complex until he was complete, then we would report to Lord Vader the location of this cell.
I fought some of the bloodiest battles in the clone wars, and had never heard such horrific screams in all my time as a soldier then I did in that room Graak was in. “