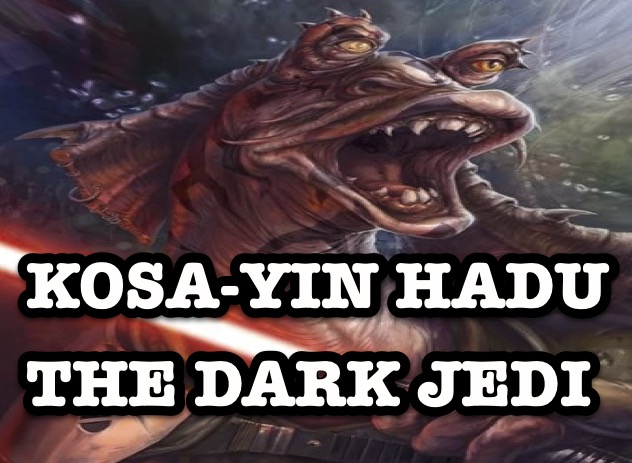 The Force-sensitive Kosa-Yin Hadu was a Gungan male who joined the Jedi Order during the waning years of the Galactic Republic. Hadu became a Jedi Padawan and studied under the tutelage of Jedi Knight Kin-Ya Dosun, a fellow Gungan. (Two gungans in the Jedi temple… Qui-gon must have been beside himself when he was alive)
The Padawan constructed his own lightsaber, and he trained to become one of the Jedi Guardians, a branch of the Jedi Order that focused on developing their combat abilities. In about 33 BBY, Hadu and Dosun were dispatched on a mission from the Jedi Temple on the planet Coruscant, but the pair subsequently disappeared. Leave it to two gungans to get lost.

“Nosa but theres a bombad sith with some crystals. Lets go after him okieday?”
Hadu fell to the dark side of the Force and became a Dark Jedi,and he eventually joined the Believers, a Sith cult that was based in a Sith fortress on the planet Almas, in the Cularin system. At some point, the Gungan infused the focusing crystals inside his lightsaber with the power of the dark side, causing the crystals to filter powerful dark side energy into anyone who wielded the weapon.

So basically, the gungan god known as Hadu made the infinity gauntlet in lightsaber form. Nice.

Circa 31 BBY, Garvin Delquist—the leader of the Believers—tasked Hadu and the Mon Calamari Dark Jedi Gar Granga with killing Almas’s kaluthin plants.The kaluthin had been created by the Sith Lord Darth Rivan thousands of years earlier to make Almas habitable, and Delquist believed that destroying the plants would help the Believers drive the Jedi Order away from Almas, where the Order operated a training facility.
A group of Believers led by Hadu and Granga established a temporary camp on an Almas hilltop and erected a tent to serve as Hadu’s field office and personal quarters. Using the camp as a base, the Believers attacked kaluthin farms across Almas over a period of three months, poisoning many of the planet’s aquifers with a biological toxin and causing large swaths of kaluthin to die.
Interesting to point out the Confederacy tried this on Naboo as well- and deployed a number of chemical weapons on the Gungans.
Agitated by the attacks on their crops, some of Almas’s kaluthin farmers blamed the Jedi Order for the death of their plants. In an attempt to further escalate tensions between the farmers and the Jedi, Hadu visited the cantina Building 49-A in the city of Forard and bad-mouthed the Jedi while in the presence of a number of farmers.

Could you imagine Gungans talking shit? I wish I was there for that convo.
“Ohhhh heesa fight like big doo doo. Yousa in big bombad trouble now!”

Also I just learned that the name of the Gungan language is Gunganese. dude.

The scientists at a kaluthin research station on Almas started to investigate the areas of kaluthin extinction, and Hadu and Grangra feared that the station posed a risk to the Believers’ operation, believing that the researchers might be able to identify the toxins that the Believers were using to poison the aquifers. In an attempt to mitigate the threat posed by the scientists, Hadu, Granga, and several other Believers traveled to the planet Cularin, where they plotted to stop a shipment of supplies from being transported to the research station, to prevent the scientists from performing their studies.
The supplies were due to be taken to Almas by the Duros Welrin Maduk aboard the freighter Fool’s Paradise, so the two Dark Jedi headed to the Fool’s Paradise’s landing bay in the city of Hedrett with some other Believers, planning to hijack the vessel. As a safeguard, Hadu and Granga parked a starship on a landing pad near the Fool’s Paradise and then concealed their craft and an exit from the Fool’s Paradise’s landing bay using a Force illusion.
(Told you, that gungan is bad ass man. Super strong in the force)
The Dark Jedi duo then approached the Fool’s Paradise while accompanied by a squad of battle droids and three other Believers, and the pair told Welrin Maduk that they had been sent by the port authority. Maduk protested and claimed that his ship had already been inspected, so Hadu and Granga ignited their lightsabers and prepared to attack the Duros. However, the Heroes of Cularin, a group of freelance agents who operated in the Cularin system, saw that Maduk was being threatened, and they came to his rescue. As the agents approached the Fool’s Paradise, Hadu and Granga fled through the concealed hangar entrance, leaving the battle droids and the other Believers to face the agents alone. (rip other Believers that aren’t good enough to run with a gungan)

Hadu returned to the Believers’ hilltop camp on Almas, where he received a holographic message from Garvin Delquist, who warned him and Granga that the Jedi had learned of the Believers’ presence on Almas and urged the two Dark Jedi to accelerate the timetable of their work to poison the kaluthin. The Heroes of Cularin investigated the poisoning of the aquifers, and they launched an assault on the Believers’ encampment. After being alerted of the attack, Hadu emerged from his tent and engaged the agents in combat along with some of his guards, while the other Believers powered up their landspeeders in preparation to evacuate the camp. The agents eventually defeated Hadu and his Believer subordinates, thwarting the Gungan’s attempts to wipe out the kaluthin. The Jedi learned Hadu’s identity, and Jedi Master Seenlu Kir began to research the mission on which Hadu and Kin-Ya Dosun had disappeared, in an attempt to discover how the two Gungans had been lost. However, her research was unsuccessful, for she did not learn anything new about the two Gungans.

Got to love a genocidal Gungan right? I mean, jar jar could be considered genocidal since his political doings resulted in the galaxy getting taken over by the Empire. But I digress- you guys voted for it, so heres what you got! I’ll be working on more lore post, but tell me your thoughts on this one!