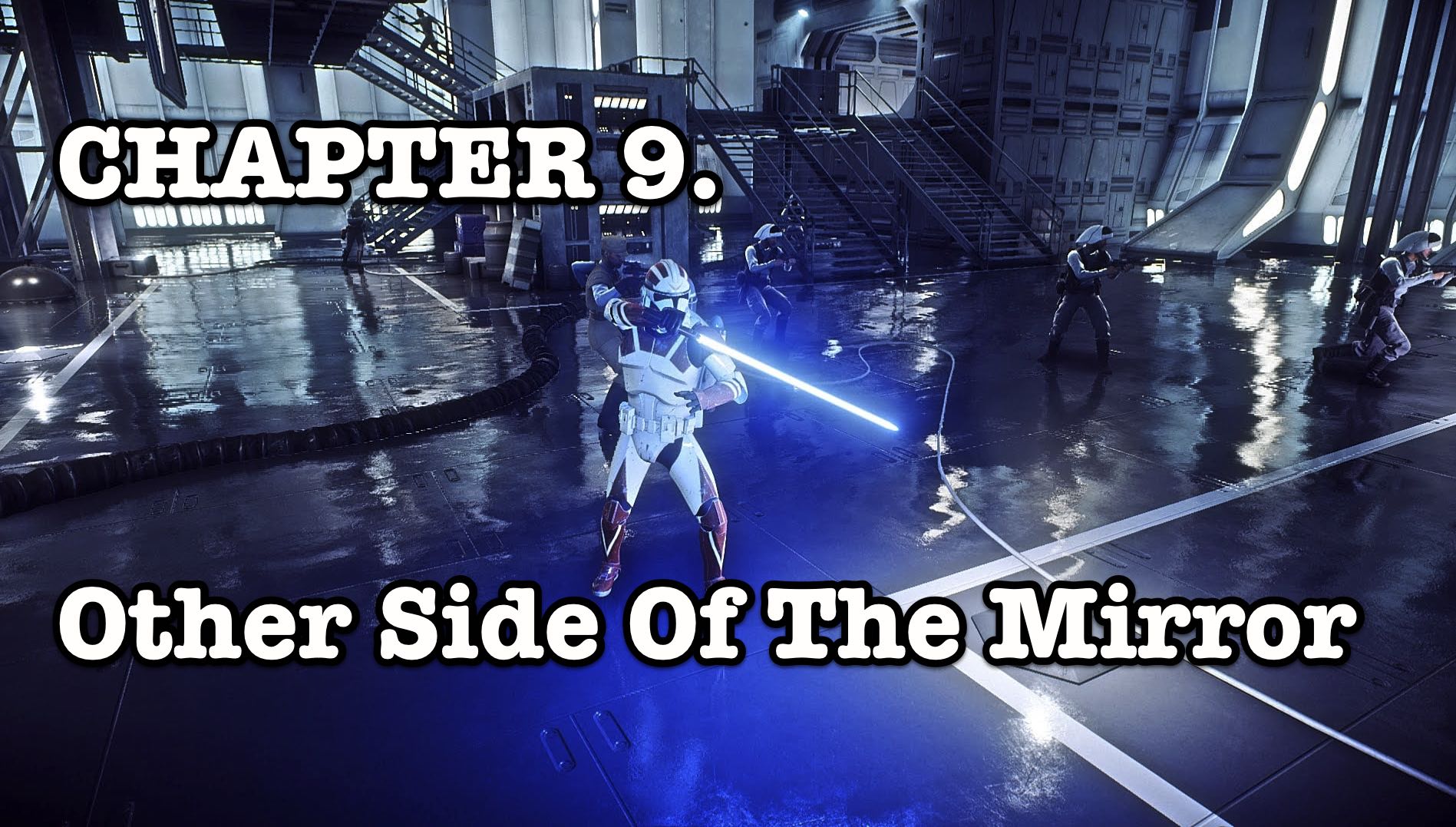 -Other Side Of The Mirror-

“After our success on Bespin thwarting out the insurrection, we were to be rewarded with a little R&R. R&R for clones is combat… but we still need our rest from fatigue. We were ordered to a space station in the Kamino system- the location was classified as Lord Vader’s ship, an Imperial I-Class Star Destroyer dubbed ‘The Devastator”. Lord Vader had placed us in charge of defending and to being prepping our gear for another assignment, while he went with what I would assume to be a bounty hunter in Mandalorian Armor. He also took a special detachment lead by our new Commander Appo. Their plans were to go on a two mission engagement, one to Kamino for reasons I’m not sure, more than likely to establish leadership and secure the next generation of Storm Trooper Clones. Then they were to go to Kashyyyk in search of a group of Jedi.

We were to defend, maintain, and ensure the protection of the Station and the Devastator. Hours after Lord Vader and his special detachment left, we proceeded to do our security patrols up and down the station. I was cleaning my T-21B when I heard the explosion on the other side of the station. I raised my weapon and headed towards what sounded like battle.

When I arrived, A thick smoke filled the corridors as I saw many of my brothers dead on the ground. A raiding party of heavily armed insurrectionist poured out of a breached airlock they must have docked to, and proceeded to open fire on my location. I radio’d in that we were being boarded, activated my personal defense shield and starting falling back from my position. Then, I saw a familiar blue glow amidst the smoke- a Jedi’s lightsaber. But.. we killed all of the Jedi except for that lead on Kashyyyk… didn’t we?

I fell back and regrouped with a station Lieutenant and my brothers of the 501st. We entered into defensive formations, being sure to cover every angle without sweeping across each other. The Officer deployed a portable ray shield and we prepared for the oncoming wave.
What we didn’t expect to see was a Clone Trooper with a lightsaber round the corner. This… this didn’t make any sense, where did he get that armor? The lightsaber? It made no difference, before I could pull the trigger a shock wave unlike anything I have felt slammed me into the wall, along with everyone else in the room. The ‘clone’ was faster than anything I have encountered- his lightsaber quickly removing limbs from my brothers. I grabbed a thermal detonator, and hurled it in his direction whilst scrambling for the door behind me.
After escaping, I ran as fast as I could to the command deck to brief the Station commander on the current situation. Before I could make it there, I was hailed via private transmission. The commander alerted me that the terrorist on board were being lead by a jedi in clone trooper armor, and were swarming the hangar bay in an attempt to sabotage all of the fighters. We couldn’t let that happen. I found a squad of heavy troopers, and ordered them to stay on me, and they know what to do.

We didn’t say a word when we killed him. We didn’t say a word when we marched into the Hangar with mini-guns, personal shields, and other heavy weaponry. Not a word. We open fired on the Jedi, he was quick with a lightsaber but not quick enough for all of us. We were able to eradicate his entourage of body-guards with precision, and then filled his armor with holes. After he went down, I walked over to his body- smoke still rising from the barrel of my T-21. I knelt down, and removed his helmet and saw….

It was a clone, made out of the same template I was made from. But.. he was stronger. He could do things I could only dream of… but.. .why did he attack us? He’s attacking what we were bred to protect. We were built to protect and ensure the Freedom, Peace, and Prosperity to our new Empire. The galaxy’s only hope for peace.

The blasted Kaminoans were using our own against us….. when I realized this, I realized Vader’s brilliance. He had predicted this. My hand tightened around the clone’s helmet. I turned to the airlock, to see multiple X-Wings and Y-Wings attacking the station. I then threw the helmet across the hangar, ordering every 501st member to get into any available TIE and to take to the stars. It was time we finish off the Kaminoan legacy once and for all, so that no more clones have to go through what we did under their ‘care’. We’d do it ourselves, and do it right.