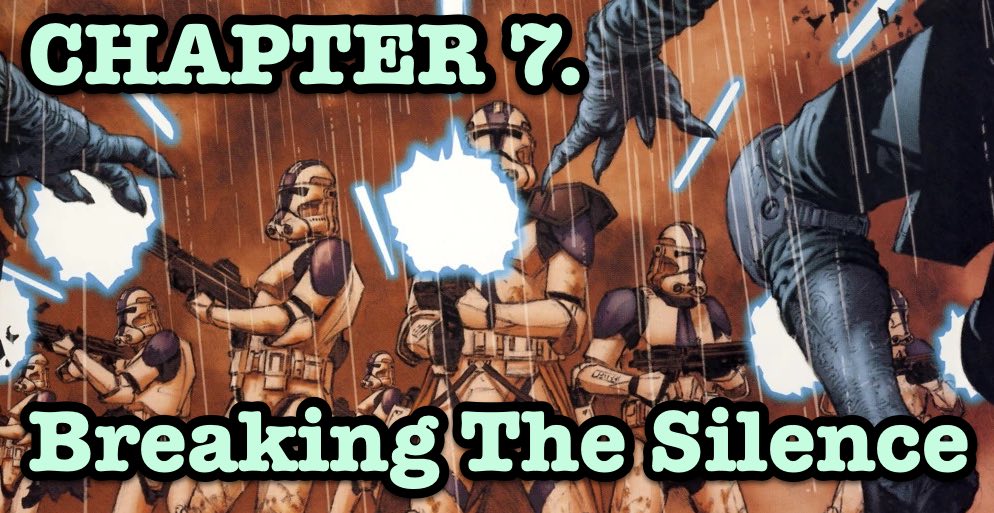 “After what seemed like a lifetime of fighting, the war finally seemed as if it was coming to an end. General Obi-wan Kenobi along with the valiant men of the 212th Attack Battalion were closing in on General Grievous on Utapau, hoping to sever the head off of the snake known as the Confederacy.

During training on Kamino, they drill in a simple phrase into the memory of every single clone produced. ‘Good Soldiers Follow Orders’. Every clone was aware of every single order, but there were hundreds. Some we knew we would never use, but we were given orders…. and I’m a good soldier.

Upon the attack on Utapau, and defeat of General Grievous, I was given special orders from the Chancellor himself. To execute Order 66, to eliminate the treacherous Jedi to secure our Republic’s safety. My orders differed however, as I was in charge of tracking down a Wookie leader named Arri Addik. He was known for distrusting the republic, but putting faith in the hands of the Jedi. If he remained alive, he could jeopardize the operation and aid them in escaping. We couldn’t let that happen.

I was dispatched to Kashyyyk to rid the Republic of this problem. Arri’s last known location was amongst one of the tree top cities that were currently overrun with Separatist forces. Should make it easy for me and my small team to sneak in undetected.

The weather was awful on Kashyyyk, tremendous thunderstorms that rocked the trees the Wookie built platforms were on. The wind had to be blowing at 60 miles per hour, with heavy rain beating down on the jungle landscape. When we landed on the platform, it was crawling with several battle droids that we took care of with extreme prejudice. I saw the vantage point I needed, guarded by two captain droids. Little did they know they were about to be knocked down a few pegs by a Sergeant.

I pushed through, blasting the two droids with a compact EE-3. After stepping over their mangled metal remains, I ordered my squad to fan out and secure a perimeter while I removed my heavy NT-242 blaster rifle. I took a sniping position with the rain beating down on my armor, slowing my breath and remaining completely still.

That’s when I saw Arri on a platform below, saying the wookies were tough would be an understatement. To see one rip apart a droid with its bare hands was… a sight to behold. I knew it was him as he had an eye-covering and signature chieftain armor, now it was time to complete my mission so Commander Gree could complete his.

I pulled the trigger, hitting the wookie in its skull resulting in lifting him off the ground and sending him backwards off the platform, There was no way he could have survived. Upon packing up my gear and drawing my EE-3, I recieved a call from the Lieutenant of the 41st Elite Corps- Gree was dead. Beheaded by the now traitor Jedi Master Yoda. We were then ordered to fan out and secure any remaining Wookies, and to bring them to the center of the tree held city where Yoda was last seen.

Upon rounding them up, I was surprised they didn’t take us on. We outnumbered them, but they stood many meters higher than us. The males standing in front of their what I would assume would be wives and children, but the children were our size. The rain beat down across the jungle, us and the wookies as thunder and lightning continued their symphony above. Loud speakers were placed throughout the area demanding that Yoda and any other remaining Jedi show themselves or the locals would face the consequences.

They never came. And good soldiers follow orders… We were given the order from the LT to execute the villagers. And so we did- we open fired into the crowd of Wookies without hesitation.

After this, I had to clear my head. I walked over to where I had taken a sniping position before and removed my helmet, feeling the water pelt my face as I looked up into the storms above.

Thinking back…. I think I understand why the man we were cloned after chose Kamino for his home. Why he chose a planet with so much rain.

No one can tell when you’re crying.”