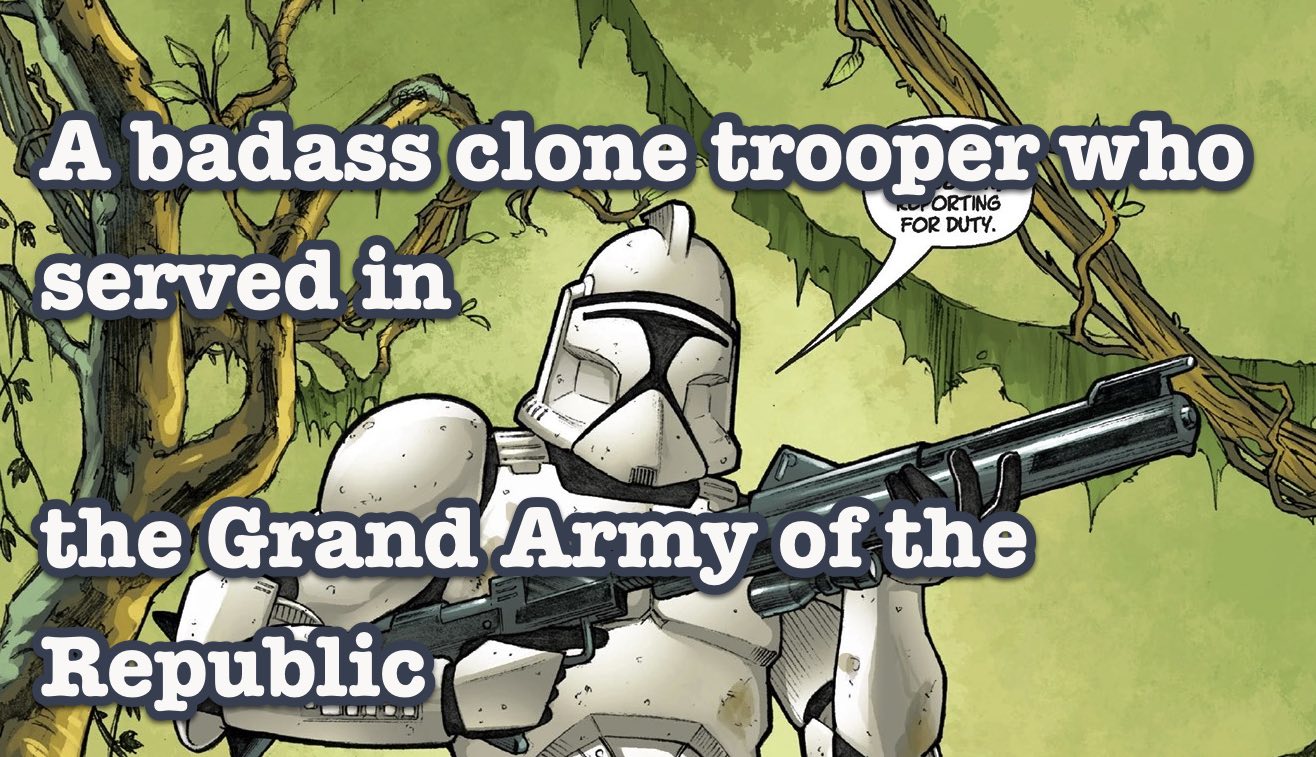 Alright, sit down, grab some merezane gold and relax while you read the latest lore, that I have dove deep into the depths of Wookiepedia for

Now when it comes to being a badass, Able here is almost on par with the legend himself Jango Fett. This clone not only survives the Clones Wars, he survives and actively fights in the Galactic Civil War , but homeboy straight fights through the Rakghoul plague as well!

So, our boy Able was one of the first generations of clones produced. He was is Shaak-Ti’s battalion. After exactly one year into the Clone Wars, he was stranded on the planet Lubang Minor when his LAAT/i gunship was shot down. More than twenty years later, the planet was contested between the Alliance to Restore the Republic and the Galactic Empire during the Galactic Civil War.

During the conflict, Able had seen Stormtroopers- believing them to be his brothers in new armor he revealed himself to them. The Imperial Officer there thought Able was a saboteur for the rebels, ordered his squad to open fire on Able. Very confused, Able ran back into forest. Wondering why he was attacked for what he assumed to be clones.

Eventually, Luke Skywalker and another rebel pilot landed on the planet and found Able- Able telling Luke that he hadn’t seen a Jedi in years, and was very confused as to why the troops were after Luke and his compadre. The pilot then explained everything from Order 66, to the events of the first Death Star blowing up. Able actually helped Luke and his friend make it off planet. Able fought several squads of stormtroopers single-handedly, buying time for Luke to escape. This included him gunning down 14 stormtroopers one after the other, and lobbing a thermal detonator onto the imperial transport and blowing it sky-high. He was then rescued by Luke, who took him back to the Alliance.

Here’s a fun fact that will make you tear up: Although Skywalker was not actually a general, Able addressed him as one anyway, as he had become accustomed to all Jedi being generals during the Clone Wars.

But his story doesn’t end there. Oh no. Our boi Able became one of the deadliest spies/weapons the Alliance had in its arsenal.

In the months that followed, Able participated in a number of Alliance missions. He was part of the team that retrieved Alliance mathematician Jorin Sol from an Imperial prison on the planet Kalist VI. Which was a penal colony DEEP in Empire Territory (being near the core)

Later, Able participated in a raid on an Imperial supply convoy at Per Lupelo. Sol was eventually exposed as a traitor and led the Empire to the Rebel fleet. Able was aboard the starship Rebel One as it escaped from the Imperial attack. When Rebel One accidentally emerged from hyperspace near the Imperial Bannistar Station, a major refueling installation, Able participated in a successful mission to destroy it.

Able also adapted and modernized his own unique kit of Clone Armor, bearing resemblance to Purge Troopers- just with Alliance Markings. (This can be seen in the pictures below)

Our boi Able went out like a warrior. During the Events of the Galactic Civil War a powerful Sith created Sith Spawn Mutants with a talisman- called the Rakghoul.
If one of these mutants scratched or bit you, you would slowly start to mutate into one of these… things.

Able was later part of a mission led by Skywalker to investigate a secret Imperial weapon located on an abandoned moon. Unbeknownst to the Rebels, the mission was a trap set up by Darth Vader using captured spy Wyl Tarson to feed the Alliance misleading information. Able, Basso, Shan, Skywalker, and Organa, along with a number of other Alliance soldiers, loaded onto an Alliance shuttle and headed for the moon, escorted by the freighter Millennium Falcon, piloted by former smugglers Han Solo and Chewbacca. After they landed on the moon, however, the Rebels found nothing but a number of crashed Imperial landing craft, and no bodies.

This was very strange, as the entire planet was suppose to be crawling with Imperials.
Or atleast near the Secret Imp. Weapon,

Shan and Able then set out to check the surroundings; Able, who noticed rocks falling from a ridge, decided to check it, and left Shan behind. Once he climbed the ridge, however, he was attacked and overwhelmed by rakghouls, mindless and savage creatures who had previously been Imperial soldiers.

Unfortunately, Able was turned by the Rakghouls (which were eventually stopped) But he went down taking down as many as he could with him before falling himself.

Able’s definitely a favorite of mine, right behind Jango and Grievous. I hope you guys like his story as well! A bad ass through and through till the end.