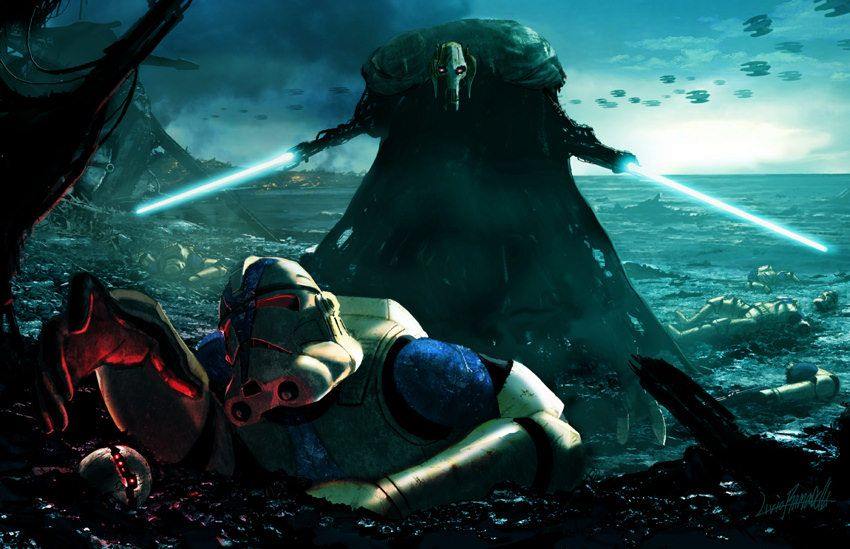 “Have you heard the tragedy of Droid Army General Grievous? Its not a tale anybody in the f**king universe would tell you”

I’m sure you all are very familiar with the multi-limbed absolute unit known as Grievous. But do you know how he became Grievous?

Grievous’ actual name was Qymaen jai Sheelal. Before joining the Confederacy, he was fighting the race known as Huks for years as the Huks were trying to enslave his entire species. While fighting the Huks, he met his first love. A female warrior known as Ronderu lij Kummar. Unfortunately, Kummar fell during battle. This led Sheelal to change his name to Grievous, and focused his efforts on wiping out the Huks.

His fighting prowess and anger was such a valuable asset, he not only drove back the Huk invading force, but made it to their HOME WORLD with only 8 soldiers, and started conquering them.

Desperate to help his people, Grievous took on a job as an enforcer for the Confederacy. However, he learned the Huks were planning to invade and enslave the Kalee once more, so after completing the initial job he took a shuttle of battle-droids with him to Kalee. Dooku sensed the fighting abilities of Grievous and had other plans for them. Dooku ordered a bomb be planted on the shuttle, and it was detonated. Grievous, with his body torn apart, was brought back to the confederacy. Dooku offered to rebuild him, and make him leader of the droid army. Grievous accepted, on the terms that he could finish what he started. Once rebuilt, he took the droid armies to Kalee and drove the Huks off, then proceeded to commit genocide on the Huks on their homeworld. The Huks, are now known as a rare species to find in the galaxy.

Grievous is definitely one of my favorite characters in Star Wars, and has a story line VERY similar to Vaders. I wish we could get a movie of him.