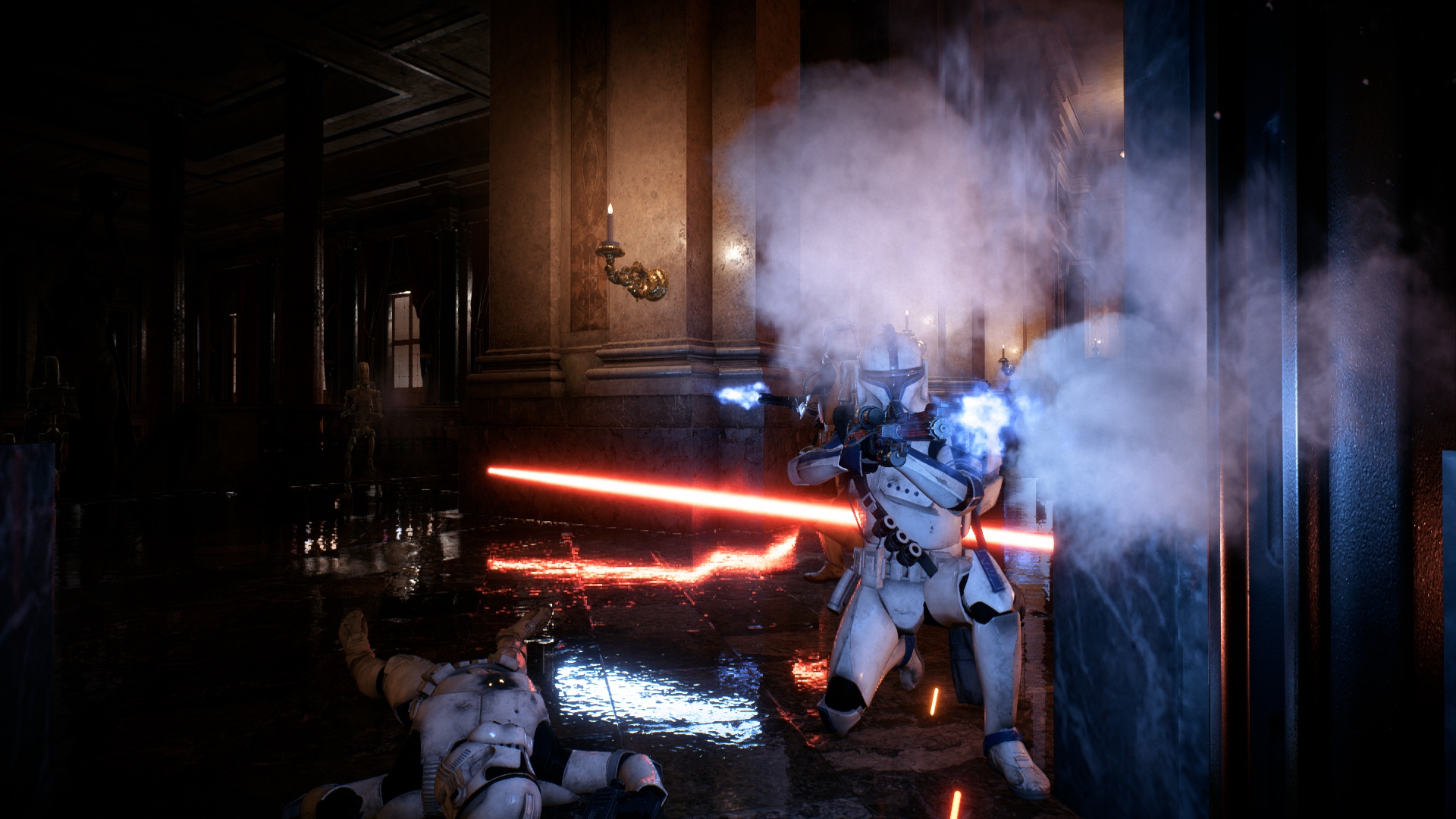 “After the battle of Geonosis, the Separatist armada then set its sites on the peaceful world of Naboo. It won’t be very peaceful for long… the seps had learned from Geonosis, and were now on the attack. Their assault was so swift as a matter of fact, only one platoon from the 501st was able to reach the city in time- and by then it could have been too late. The garrison of guards on Naboo had fought a hard battle when our LAATs landed amidst heavy enemy fire, we arrived at a scene of corpses. The once beautiful city of Naboo, the Theed was in ruins. The Separatists had set fire to buildings, killing civilians, and were now prioritizing the capital building. We met with the Guard captain, a man named Quarsh Panaka. He informed us they had sustained heavy casualties, their last fortified position was the Capital building. When my squad entered, we saw chairs and tables flipped, makeshift cover, and plenty of wounded men.

We were ordered to assist in any way possible, so our medics administered bacta to the wounded guardsmen while the rest of us took up defensive positions. All of us armed with DC-15As, ready for whatever the separatist could throw at us. Or so we thought…The droids came in full force. From the number of droids coming our way, we knew this would be their last and final attack. We open fired on them, dust kicking up from where our DC-15A’s were resting. For a moment, we thought we were winning. That was until the vulture droids shredded our exterior defenses, dropping bombs from above. We were forced to retreat into the capital building, placing traps and mines along the way.The first wave was comprised of mostly B1 battle droids, but damn there were so many… they overwhelmed our 30 man team with ease and were in the process of creating new entrances into the capital building. But our orders were to hold… so that’s what we will do.

After another half hour of fighting, the droids starting pushing more aggressively. There were only 20 of us in total, clones and guards fighting back to back. They had easily overtaken our position, but we were willing to die for that throne room. At one point, they had snuck behind us and killed 3 of us, I saw the red luminescent bolt plow into the back of one of my brothers. I grabbed him by his armor plate, dragging him back behind the cover of an overturned table. I then activated my personal defense shield, and attempted to push back- taking on large amounts of both small arms fire and heavy blaster fire. At one point, my shield was dropped consequently frying my DC-15A. I then immediately switched to my DC-15S, and continued to push forward. I then heard screaming, I looked over to see a droid dropship had blown a hole through one of the walls of the building. I saw another droid in front of me, snapping me back into the fight. I open fired on the droid. I then heard a loud explosion with dust covering the room in a fog, followed by another explosion and then… everything went black…..”