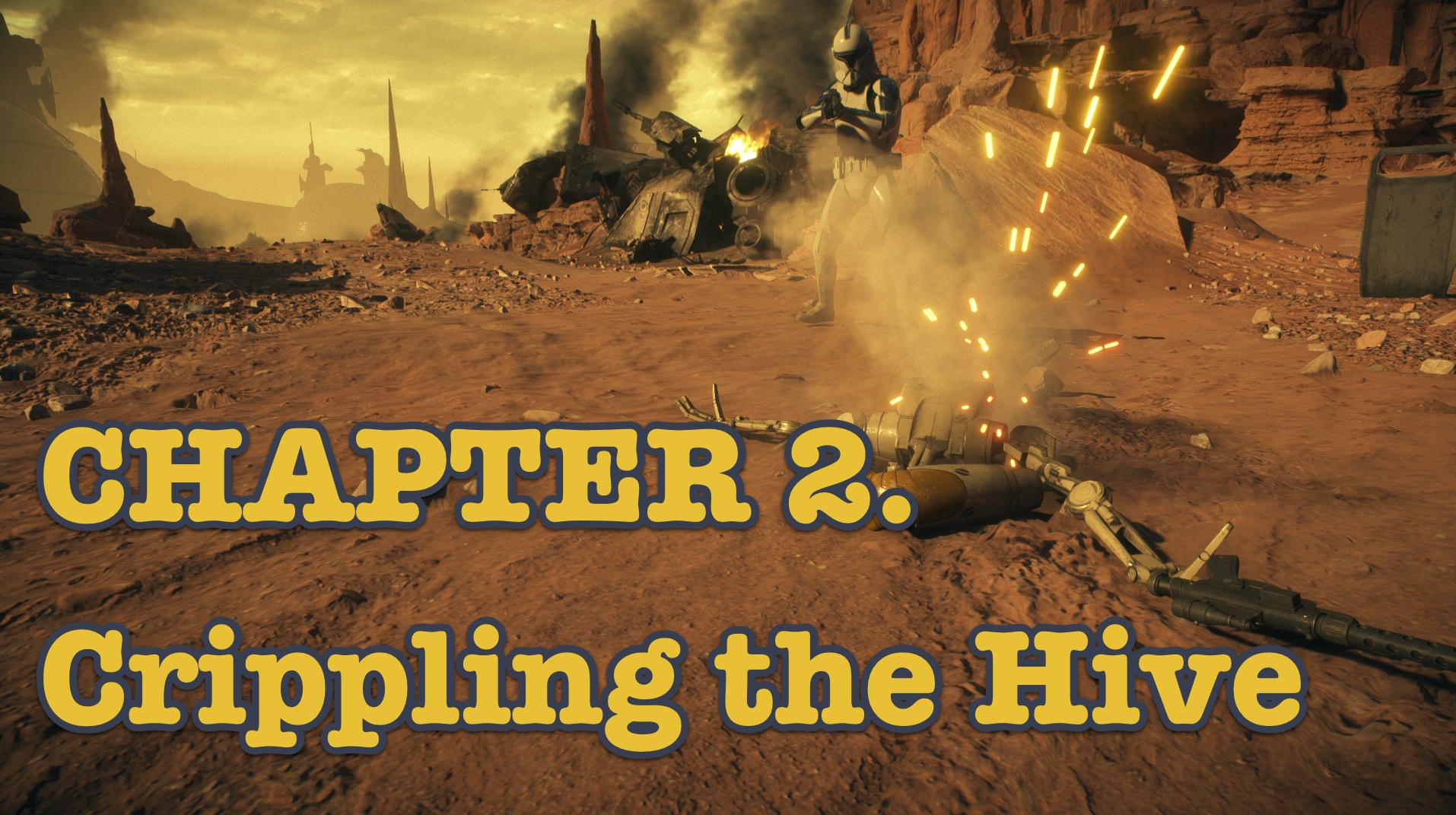 “After several hours of combat, we finally were able to push through and set up a perimeter. It didn’t last long, but we could finally catch our breath. We finally received orders from our command ship in orbit- which were to break the legion up into teams to besiege different zones of  the planet. My fire-team was tasked with executing the Commanding droid for their logistical base in the region. Ending the droid may give us the one up we need, and sever the droid’s supply chain so the other legions can pursue the main target: the core ships.

As we were approaching the LZ, we had 3 LAATS with squads of my brothers mentally preparing themselves for the hell we were about to walk into. Knowing we were going to be shot at from every cave, crevice and other hell holes this planet had to offer. We had been assigned one AT-TE to assist with our push and disrupting their supply lines. If only we knew what we were walking into…

As the three LAATs approached, a rocket had struck mine. Sending the craft into a circular spiral into the ground. I was knocked unconscious, but as I came to I came to the  horrid realization that I was the only survivor in the crash. As the dust settled,  I looked around and saw my brothers draped over the wings of the LAAT, while noticing the increasing amount of smoke filling the drop-ship. I climbed out of the wreckage grabbing my DC-15 and exited.

Upon exiting, I exhamined the landscape. Seeing pockets of my brothers fighting those walking toolboxes,… but… where was the AT-TE? As I moved forward, I then had spotted the wreckage. It looked as if the AT-TE never made it to the ground, it was all but destroyed looking as if it was dropped from the sky. More than likely had been shot out of the sky… there were 30 of my brothers onboard… gone in an instant.

But the droids didn’t give me an opportunity to morn. As I was observing the wreckage, I was ambushed by a heavy assault droid. The clanker got a few good hits, knocking me on my back. I was able to bring my DC-15 up before he finished me off, and lobbed a blaster bolt at its head. Good riddance.

After regaining my composure, I then saw my target. The commanding droid for this logistics post. Limping in its direction, I raised my DC-15 and fired until my gun overheated, decimating the unsuspecting droid. I regrouped with the remaining survivors, a whopping four clones out of the 60 that were sent. Why did the Jedi send us in to a heavily defended position with only 60 men… are they even fit to lead?

After regrouping, we received another message from command. The core ships were destroyed, and the 501st was being rotated off planet. I wonder where they’ll send us next…”